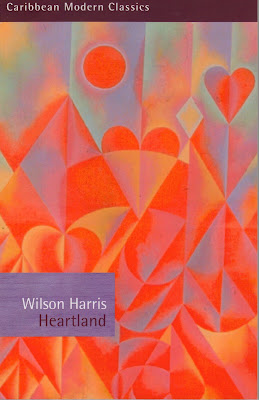 It was Gregory Rigsby who first put the name of Wilson Harris in front of me. Rigsby was the professor for the first course in Caribbean Literature I ever took, as an undergraduate at Federal City College. All of the names on the syllabus were new to me; all were artists I am still reading and studying these many years later.
The problem, then as now, was getting the books. The syllabus called for us to read PALACE OF THE PEACOCK by Harris. Even though Harris was published by so esteemed a press as Faber and Faber, it turned out that the book couldn't be gotten in the U.S. in those days, and so we didn't read that novel after all . But, already a haunter of used book markets, I turned up a used copy at a store over in Georgetown. Within pages, I knew I had to talk to Dr. Rigsby about what I was reading, and I knew I wanted to read everything Harris had published.
Thanks to C.L.R. James, who loaned me his copies (including those that were autographed presentation copies given him by Harris himself), I was able to read through all of the novels published up to that date. And thanks to book dealer Barry Alpert, I was eventually able to get my own copies of many of those early Faber and Faber editions.
Then, for a period of about a decade, a fair amount of Harris suddenly was on the shelves of American book stores. You could get the paperback GUYANA QUARTET, for example, which reprinted his first four books, and the most recent novels were also available. But that ended soon enough. The last one that I saw in stores was the incomparable JONESTOWN, which I reviewed for Nate Mackey's journal HAMBONE.
And then again, no Harris in the States. The more recent books have not been circulated at all here. If you want to read anything other than his non-fiction collection from Routledge, you have to import the book through Amazon UK or something. Even then, some of the older books are no longer available, even on the used book market.
Which is why it is such spectacular news that Wilson Harris's HEARTLAND, which had long been unavailable (unless you wanted to spend a considerable amount of money to get it from a rare book dealer) has now been returned to print by PEEPAL PRESS.
This new edition is part of the press' CARIBBEAN MODERN CLASSICS series and comes with a brief note from the author and an introduction by Michael Mitchell. In much the way that Harris's first four novels formed a GUYANA QUARTET, HEARTLAND is seen by its author as part of a trilogy that includes TUMATUMARI and THE SLEEPERS OF RORAIMA, and so its return to print is a boon for those (like me) who have had to read the latter two novels without ever having clapped eyes on their namesake predecessor.
The peepal Tree Press website is well worth a visit, so follow this link. You'll find available there such luminaries as Jan Carew, Edgar Mittelholzer, Earl Lovelace, Marion Patrick Jones, V.S. Reid, and many others. You'll also find there the announcement of a rediscovery, to be published next year: Elma Napier's A FLYING FISH WHISPERED, which is a 1938 Dominican novel featuring what the press terms "one of the most delightfully feisty women characters in Caribbean fiction." Perhaps a cousin of C.L.R. James's Maisie?!
Posted by Aldon Lynn Nielsen at 11:17 AM No comments:

Q. DEAR NIELSEN:
What's all this I'm hearing about Republicans and a "public/private option"?
--Confused in D.C.
A.
Dear CDC:
Always glad to help out with the confusion.
For many years, conservatives both in and out of government circles, including such think-tanks as Enterprise and Heritage, have been lobbying heavily (and spending millions of dollars on the effort) to bring about a public/private option. The argument they have made as consistently as conservatives have ever argued for anything is that only competition between a public option and the private sector can bring about the improvements that we so desperately need. Only a healthy competition between the public sector and the private sector can bring into being the sort of market efficiencies that lead to the best results and the greatest savings. So strongly have Republicans in particular felt about this crying need that they have been willing to divert billions of dollars in tax payer funding to support public/private option systems. The conservative position has been that nothing short of tax-supported competition between a public option and multiple private options can save us from the current unsatisfactory dispensation.
Despite numerous independent studies that have shown few demonstrable benefits from such systems when they have been tried, conservatives cling tenaciously (one might say almost bitterly) to their dream of competition between a public option and public-financing for private options in K-12 education.
Does that help, CDC?
Q. Hey -- I was talking about health care, not schools!
A. Oh . . . so sorry. That's completely different, isn't it.
Posted by Aldon Lynn Nielsen at 10:13 AM No comments:

1/2 a Poem for David Bromige

(San Jose to Louisville -- 1989)
No one can tell you
Not to listen
With half an eye to fate
Another
Half occluded
Any one had
Half a heart
Would hear
What snow amounts to
Above a city's profits
An attendant
Face angled into light as
She lifts into heaven
Ahead
[She loves to hear him
Whisper "solipsism" in her ear]
Pressure we share
Attendant upon
Arising
A mother draws
Four of each for
Her two children
Who persist
In saying "seven"
Sentences take more time
As our shadow
Across snow
Flying etches
Posted by Aldon Lynn Nielsen at 9:08 PM No comments: