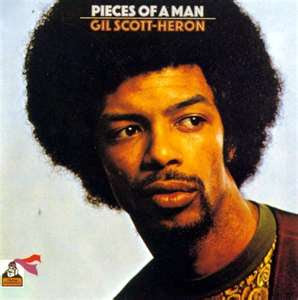 small talk at 125th and lenox
a collection
of black poems
by
gil scott-heron
photographs by steve wilson
THE
WORLD
PUBLISHING
COMPANY
NEW YORK
AND
CLEVELAND
The very first LP released by Gil Scott-Heron bore the legend "A NEW BLACK POET" above the title, and that's the way I want to remember him. The world first knew him by way of a recording, "The Revolution Will Not Be Televised," which has become so much a part of our vocabularies that people routinely allude to it in print without feeling the need to identify its source. The recording most remember was not, though, Scott-Heron's first version of the piece. His first album included a version that was very much what he had been doing live; the second version, found on his second album, featured a full band with a driving bass, and that's the one we all heard booming from our radios. A poem -- on the radio -- and it was a hit. Dylan had broken the restrictions on the length of a pop record (though most radio stations played a version missing one verse), and now Gil Scott-Heron had shown you could have a hit record that was in fact a poem. No singing at all -- and so we were almost surprised when we got the album and found that he sang too -- that, in fact, he was a great song writer. Before you knew it there were covers of his compositions everywhere. If you've never heard it, look up Esther Phillips's scorching version of Gil's "Home Is Where The Hatred Is." La Belle, no longer the Blue Bells, even covered "The Revolution Will Not Be Televised," mashing it up with "Something in the Air." These were the kind of recordings that could change your life.
I first knew of Gil Scott-Heron by way of those records, but I soon came to know him as a writer and a teacher. As a newly enrolled English major at the Federal City College in my home town, Washington, D.C., I was working a night shift across town and then going to school full time in one of those "temporary" buildings, this one over on E Street, left over from the second World War. (That building, which then housed most of the humanities for the college, later became a shelter for the homeless. Now it's gone, temporary at last.) There were always vendors with tables outside the building, selling African arts, tapes, incense, you name it. As I sat in Gregory Rigsby's Caribbean Literature course on hot days with the windows open, I could hear Doug and Jean Carn's vocal arrangement of Coltrane's "Acknowledgment" floating up from the vendor's boom box below.
And my Professor for Creative Writing was Gil Scott-Heron.
I'll admit to being a bit awed as I approached the first meeting of the course. This guy was just a year-and-a-half older than me and had already published two novels, a book of poetry, and four record albums. He'd just recently earned an MA in writing from Johns Hopkins University over in Baltimore. That first novel, The Vulture, was a murder mystery with an intricate plot. Clearly Scott-Heron knew something about the form. His second novel was one of the first to offer a depiction of the contemporary HBCU with its plot involving radical politics at a black college. 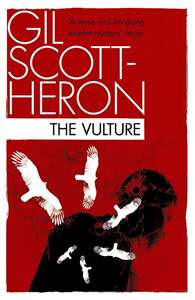 Came the first day of class and I entered the room to find just two people there, a young woman and a tall skinny dude wearing a World War I aviator's cap and gloves that had no fingers. I of course took a seat by the young woman and struck up a conversation. At one point I expressed the hope that there were more than three of us in the class. Without looking up, the skinny dude, who'd been furiously making notes the whole time, said, "Oh, there's fifteen people signed up." That, as it turned out, was Gil Scott-Heron.
Gil was one of the three professors most responsible for what I went on to become in my career. He rapidly saw what I was trying to do and was encouraging from the outset. We spent many hours in his office kicking around ideas about books we loved. (He always carried an attache case, and as that case sat open on the floor of his office you could see the distinctive shape of his first book of poems sticking up out of a pocket in the lid, a book tall and skinny like its author.) Like all good creative writing teachers, he assigned a lot of reading. I'd already read people like Chesnutt and Toomer on my own. My first African American Lit class had brought me to Melvin Tolson. To my reading of more "out" novelists like Ishmael Reed, Gil added the works of John Hawkes, who I had never read before. The Lime Twig was on that first syllabus. Gil read voraciously and read every type of literature. In addition to the most experimental novelists, he also had a real taste for genre fiction, especially genre fiction built around some challenging formal device, like his own first novel. I remember he loved The Taking of Pelham 1 2 3, and I can see why. (These guys take over a subway car; then what?!) Gil would diagram these plot issues with us on the blackboard and we'd discuss how to handle various intricate corners we might write ourselves into and out of. Gil also read and liked to talk about We Almost Lost Detroit, one of the first books to raise popular concern with nuclear safety issues. That reading in turn led to the creation of the song "We Almost Lost Detroit This Time," which Scott-Heron performed at the legendary No Nukes concert, and you can hear it on the album made from that benefit concert. 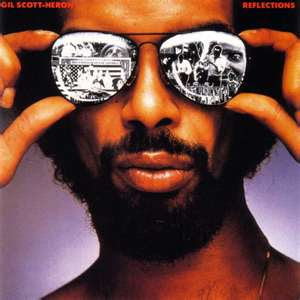 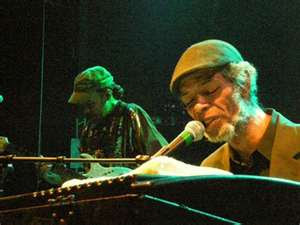 Sure enough, a few more students showed up, but one thing that made that first class so worthwhile was its intimacy. We all felt free to talk about anything and our work benefited from it. I was already publishing poetry by then, but Gil's class was a place where I could try out new ideas.
I took a second class, but by then word had gotten around that Scott-Heron was teaching at FCC and the class was filled to the brim. The college, which was not paying Gil much, wanted, like all colleges, to shoehorn as many students into as few classes as possible. Gil, an accomplished performer from an early age, had no trouble managing a large class, too large for creative writing, and we still had those great, free-ranging discussions in his office. (The phone by then rang constantly. Gil would answer, and was always nice to the people on the other end. But whenever they asked him about the music he'd tell them to call Brain Jackson, his partner in the band, who knew much more about music.) It was clear, though, that Gil, who had now signed with Arista records and was touring more frequently, would not much longer have the patience to deal with the college administration. Soon enough he had left the school, and teaching, behind.
Years later I had become a professor myself, at San Jose State in California. Gil Scott Heron was playing at the Great American Music Hall in San Francisco. I met him back stage and had the pleasure of presenting him with a copy of my first book of literary criticism, autographed. (For some reason, I had never thought to ask Gil to autograph any of his albums or books -- and my papers with his comments on them vanished many moves and years ago.) For a minute there, just a minute, it felt like we were back in that tiny office in that temporary building in D.C. again, just two guys with no air conditioning talking poetry for hours.
The world knows Gil Scott-Heron as the performer of those great songs, looming over his electric piano, cap on head, singing, "Now it's winter / Winter in America." But for me, he'll always be that prodigiously talented young man, a copy of his first book of poems poking up out of his attache case, excitedly telling me about some book he had just finished reading.
Posted by Aldon Lynn Nielsen at 3:14 PM 4 comments:

Parroting Will: On the Substance of Will Alexander's ON THE SUBSTANCE OF DISORDER 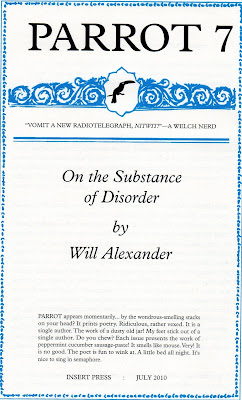 I somehow missed the Blanc Press PARROT series, which appeared in LA in the years after I'd left for central PA -- but now Insert Press is bringing them back in a sudden flock. These are gorgeous little pamphlets, designed to parrot the pamphlets once published by Black Sparrow Press. (See the black parrot on the cover?) This being PARROT Seven, there are seven black and blue parrots on the back cover. Once insert has completed the run of facsimile parrots, the entire set will be made available as a limited edition, signed and numbered set.
Number seven, seen here, is Will Alexander's On the Substance of Disorder, which you should order. Visit the Insert Press web site by clicking here.
"You see, I am simple in the sense that the lamp burns beside me and I speak." -- Will Alexander
Posted by Aldon Lynn Nielsen at 7:16 PM No comments:

"Thirty years ago, conceptual artists claimed to have broken with the forms of commodified art by no longer creating solid objects available for private ownership, but instead specific forms for the presentation or spatialization of ideas: a hole in a wall, a crack running through a building, [the New York Times], a line in the desert, etc. And yet intellectual and artistic property did not disappear; it simply underwent a displacement. Artists increasingly began to be viewed--and paid--as owners and sellers of ideas as such. This meant that intelligence itself came to take the place of its products, implying a radicalization in the idea of private property. The immateriality of concepts and images, instead of doing away with private appropriation, turned out to be its best refuge, the place where its reality is tantamount to its self-legitimation."
--Jacques Ranciere, Dissensus: On Politics and Aesthetics [except for the part about the NY TIMES]
Posted by Aldon Lynn Nielsen at 11:30 AM No comments: