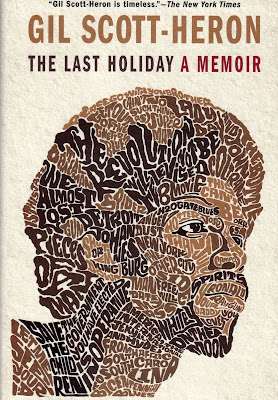 I'll have much more to say about this in other venues, but I wanted to post a quick note here on the publication of Gil Scott-Heron's long-awaited memoir. I first heard of this book when Scott-Heron mentioned the manuscript to a reporter; like many others I was eagerly looking forward to this new book when I saw an announcement that it was forthcoming from Canongate -- but then it continued not coming forth, with no explanation. The book is finally out as a posthumous production, but it's important to keep in mind that Gil was not on the scene to make final decisions about the text. The American edition is from Grove, who are all too coy about matters editorial. While I certainly didn't expect a critical edition or a full scholarly apparatus, the publishers should tell us a bit more than we learn from the one line on the copyright page acknowledging Tim Mohr's editorial efforts.
This book is the traditional "good read." Gil uses the tour he did with Stevie Wonder in support of the HOTTER THAN JULY album and the cause of getting a national holiday in honor of Dr. King as a framing device, and this is effective. (Gil's own new album of the time was REAL EYES.) I think many readers will be surprised to learn that even after having a hit record with THE REVOLUTION WILL NOT BE TELEVISED, Gil's primary ambition was as a writer, and that he formulated a plan to become a university professor of creative writing even as his songs were taking off. (He talked his way into a fellowship at the Johns Hopkins creative writing program.)
The Last Holiday will frustrate readers on some scores; Scott-Heron really tells readers very little about some of the most important relationships in his life. We learn nothing about the parting of ways with his long-time song-writing partner Brian Jackson, or about what happened with his marriage. Then again, when readers get to the heart-breaking last chapter they will learn something of the possible cause of that reticence, and they will also see that this book is in many ways a testament to his mother. While the book goes on past the tour with Stevie, those final passages gloss over a decade without revealing much, and there is little to warn of what was in store in the artist's final two decades. The book is strongest on Gil Scott-Heron's school years and on the era of the seventies. At several points in the narrative the author breaks from standard prose and gives us couplets; you can almost hear Scott-Heron reciting these against a musical background.
This is a compelling book with much to teach us for all its elisions.
Canongate has posted an audio recording of Gil reading from an early version of one chapter, recorded in the 90s, a chapter telling of the night on tour when word came of the killing of John Lennon. You can listen to it here.
Posted by Aldon Lynn Nielsen at 8:46 AM 1 comment: 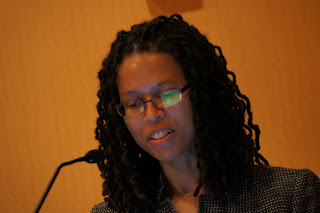 Where I'd been pleasantly surprised to find so much poetry at the Guelph Jazz Festival, I was dismayed at how small a role poetry had to play in the 2011 American Studies Association conference.

But the reading placed on the last night of the program more than made up for that, as Nathaniel Mackey and Mark McMorris read together to an enthusiastic audience. Mackey presented work from his brand new book, Nod House. McMorris read from his "Dear Michael" series. Evie Shockley presented a critical response to the readings and the poets generously participated in a wide-ranging discussion with the audience. 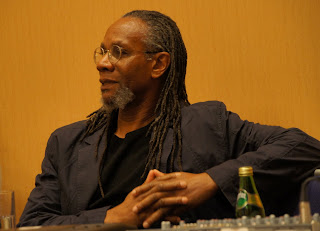 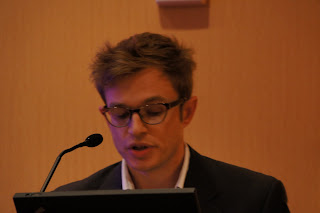 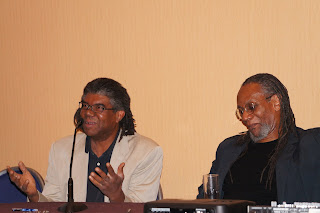 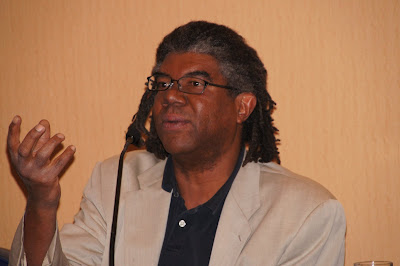 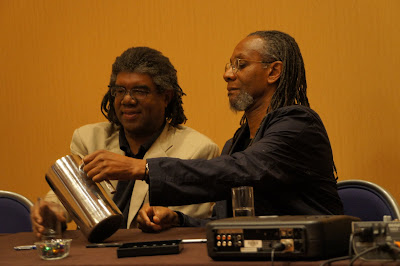 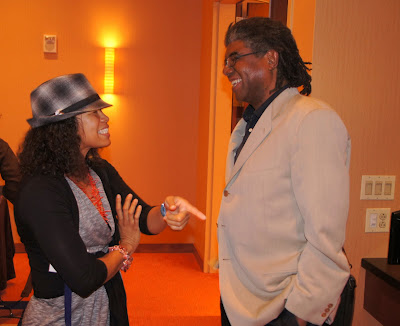 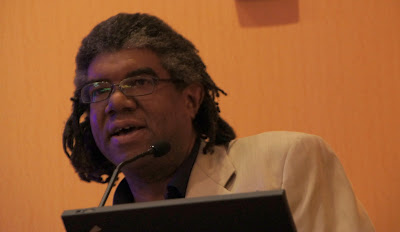 pace a click.
Posted by Aldon Lynn Nielsen at 10:29 AM No comments: 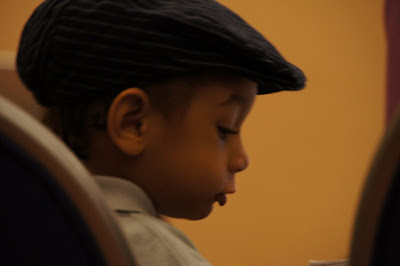 BEFORE THE FALL . . . I went to the meeting of the American Studies Association, where I saw many colleagues and friends: Priscilla Wald and Joseph Donahue, Larry Jackson, Gene Jarrett, Mark Anthony Neal, Brent Edwards, so many others. Among the many panels I got to, one on new work on Frederick Douglass, a great digital humanities conversation, the panel I chaired presenting novel approaches to cultural studies of music . . . But by far the best was the saddest, a memorial tribute for Clyde Woods. Clyde had organized a session on post-Katrina arts of New Orleans when the ASA met in D.C. a few years back, and several of those artists and presenters were on hand at this memorial along with Clyde's family, colleagues, friends and even just people who admired his work. I had known Clyde first at Penn State, and then he turned up at the other end of my commute in Santa Barbara. The last time I'd talked to Clyde had been at a summer party to honor Geoffrey Jacques's book of criticism, which Clyde, I note, purchased and got autographed. He was always a great supporter of other people's work, and so many of us benefited from his generosity and encouragement. 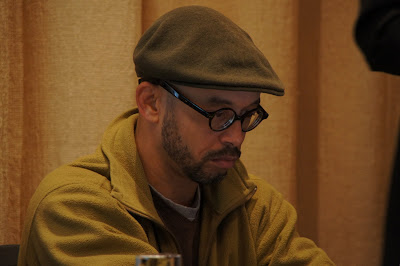 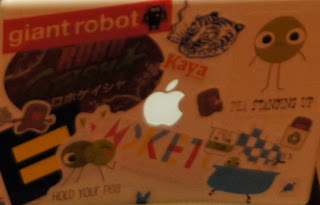 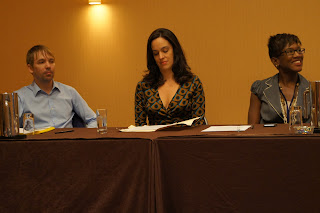 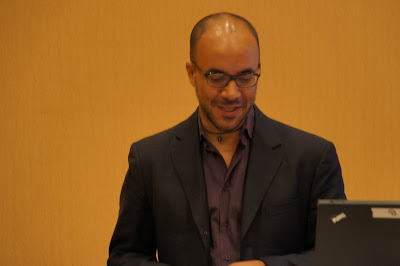 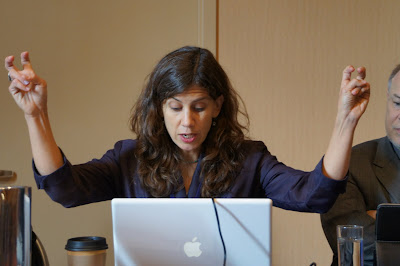 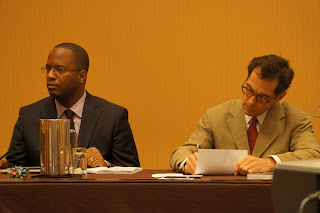 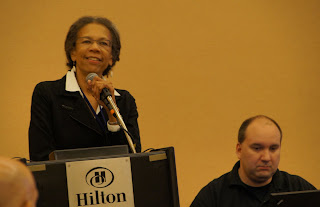 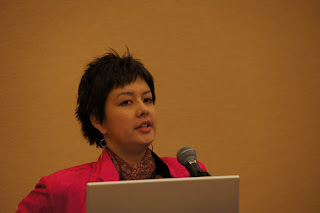 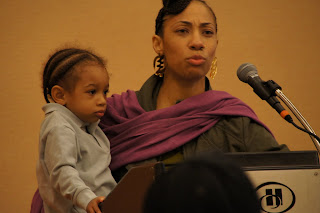 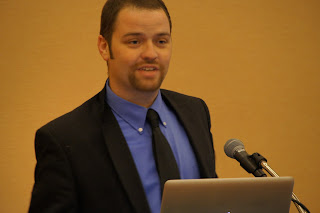 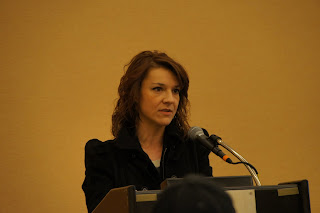 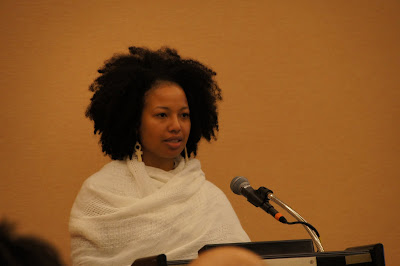 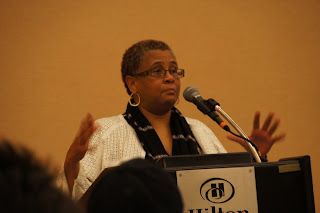 Posted by Aldon Lynn Nielsen at 7:25 AM No comments: