When Justin Perez posted this link a little while ago, my response to the headline was just what you would expect from me. How delicious that a young Republican attempting to fan the flames around the email story would, following in the glorious tradition of Melania Trump, plagiarize in the most egregious way. Delicious, yes, though I wished it had happened at some other university and not the one where I teach.
But then I read the stories. The College Republicans issued an apology, as they should, but in that very apology they undercut their moral position even further:
"We took this matter seriously and acted swiftly to address the concern when it was called to our attention. The Chief of Staff’s final and rough draft have been reviewed, and we have concluded that he had no mal-intent, but this is still a serious issue to deal with accordingly."
A writer does not accidentally commit rampant plagiarism. Whatever else the staffer thought he was doing, he was clearly representing other people's (copyrighted) words as his own. This would be the subject of immediate disciplinary action in any class of mine.
As if that were not bad enough, the problems were compounded by the editors of the Daily Collegian. They pulled the piece as soon as the plagiarism was brought to their attention, a proper course of action. They apologized to their readers for failing to thoroughly vet the submission, again a proper action. But then they wrote:
"This mistake was one created without intent; we have no reason to believe the author knew the extent of his transgressions when his article was submitted. "
How in god's name does anyone copy passages from other people's columns without intent? How does anyone copy multiple passages from a variety of sources and claim not to know the extent of their transgressions.
As a professor who teaches writing at the university where this has happened, I am profoundly disturbed by the messages these ameliorative statements convey.
But maybe I am over reacting. Maybe I have all along misunderstood the purpose of a university newspaper. In their statement, the editors of the Daily Collegian make clear their own intentions:
"It is our job as a news organization to dispel both factually and ethically honest information to the public . . ."
http://onwardstate.com/…/college-republicans-officers-coll…/
http://www.collegian.psu.edu/…/article_d645aa1c-544a-11e6-9…

Posted by Aldon Lynn Nielsen at 12:14 PM No comments: 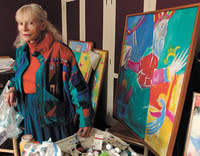 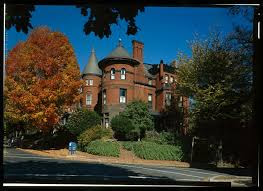 I didn't see much of teachers and friends from Wakefield High School after age 17, when I graduated and headed into D.C. to get schooled. I did run into Mr. Haygood, the Algebra teacher in 10th grade who had shared his recordings of Lightnin' Hopkins and Sonny Terry with me, at a Muddy Waters show in Georgetown's Cellar Door. And I saw a lot of the beloved musicians with whom I'd worked in a band all through high school.  As I kept moving around in D.C., it seemed most of the people I had known moved either farther out in Virginia or out of the area all together. So it wasn't until we all got onto social media decades later that I started to reconnect with a few folk.

Recently some of us were remembering the experiences we'd had our senior year in an amazing Art - English - Music seminar we'd been in, and that led, as these things do these days, to googling our 12th grade Art instructor, Joann Crisp Ellert. William Kaffenberger and I made the discovery that she was listed as the author of two novels, and we both immediately ordered up copies. 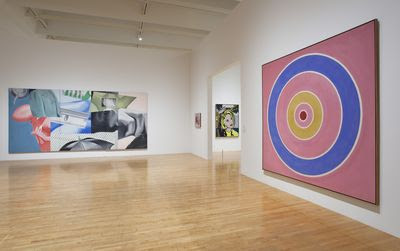 
I wish I could say Ms. Ellert had proved to be a compelling novelist. Let's say that in the same sense that I am a poet/critic who probably doesn't have a future in painting, she was a painter/sculptor/educator whose fiction is probably not destined for the syllabi of the future. Just the same, I'm glad that it was her second book that arrived first. 3099 Que Street may not be Fitzgerald, but it is a valuable look at the D.C. art world in the second half of the twentieth century.

The book is a roman a clef set among the artists of the Washington Color School and the gallery scene from the late fifites through the nineties. Many of the gallery owners and journalists appear under their real names, but the primary painters, like the protagonist, have pseudonyms.  I kind of wish the publishers had added identifications. Even without them, I think I knew a couple of the painters who make brief appearances.

The writing isn't great. (Four of the women we meet are "angular," including the protagonist.) And there are odd slipups. The description of Gallery 10 correctly places it across from the Dupont Circle Metro stop, but then says you can see Wisconsin Avenue from the window. That's Connecticut Avenue reflected in the gallery's door you see depicted here. And the narrator describes walking down the "Exorcist Steps" to Wisconsin Avenue. (What is it about her and Wisconsin Avenue?) -- As legions of fans who have made the trek from all over the world will confirm, walking down those steps (as opposed to being thrown down them by Satan) brings you to M St. 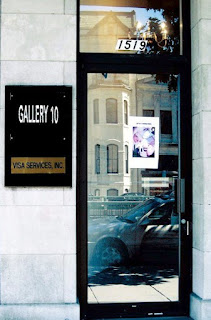 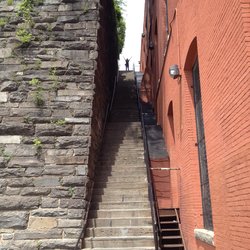 The novel takes place among a social class about which I know little. This is the world of people who subscribe to and might get profiled in Washingtonian magazine.  The rest of us were always from "D.C." --

But even though folks like me didn't get invited to Georgetown soirees, radical art is radically available.  I've been to all those galleries. I've seen those shows, even been in the room as some of them were hung. I got to meet many of those artists.

Reading the book, though, I wonder how it is that I never again met Ms. Ellert. With several of my musician friends, I'd played at a party Ms. Ellert held at her Virginia home, a Frank Lloyd Wright house, in the years before she lived in Georgetown. But over and over again in reading this book I realized that I had been in many of the same places (Kramerbooks, The Old Ebbit Grill, the Corcoran, the Hirshorn, Luigi's restaurant, Washington Project for the Arts, the Childe Harold [first place I saw Bruce Springsteen, Pinetop Perkins, Emmylou Harris, so many . . .] ). At one point in the book she is standing outside the Harriman house, in whose basement in those days lived Rick Peabody, publisher/editor of Gargoyle Magazine. At the end of my D.C. time I was living just a ways up the street from the house whose address provides the novel's title.  I remember, even in the years before my short sojourn in Georgetown, walking past and seeing that mischievous mannequin head she placed in a fourth floor window.

Since I was part of what the narrator terms "a lower strata of a metropolis," I wasn't going to run into her at one of those fancy parties she and her husband attend in the book (and unlike the main characters, I don't own a vacation home outside town with a second studio in it, nor do I get invites to Virginia hunt country), but D.C. is a compact space, and it would not have been at all unusual to run into her, as my own college students often ran into me around town.

But this may be the only novel that really depicts the D.C. art world in any detail at all, and it's a fascinating picture.  Putting two and two together, I gather she must have been doing her graduate work when I knew her, and the connections to the Washington Color School that I now know about probably explain how she was able to get the then young Sam Gilliam to visit our school and show us his work.

There was one other shoe to drop, though. This book lists the small number of Ellert's publications, and that's how I learned that not long after I graduated from Wakefield, my art teacher published an essay in the Journal of General Education (published by Penn State, where I now teach), titled "Bauhaus and Black Mountain College."  If only I'd known back then. I remember sitting in her class and reading poems by Charles Olson, Ed Dorn, Robert Creeley, Denise Levertov, the whole Black Mountain poet crowd I was just discovering, originally by way of their New York cousin LeRoi Jones. It would have been lovely to talk with Ms. Ellert about Cage, Albers, Black Mountain.

There is now a gallery named for our art teacher in Florida, where she and her husband had gone before their deaths. One day I hope to visit her paintings. And in the meantime, I hope I can search out that profile of her in Washingtonian and the Post's reviews of her shows. I was never going to be a painter. (a fact which somewhat exasperated her -- I have found over the years that people who can draw and paint are puzzled by those of us who cannot. Thank god I have cameras.)  She was never going to be a poet. But there is still a lot of what she gave me in my work, for which I am grateful.
Posted by Aldon Lynn Nielsen at 2:30 PM 1 comment: 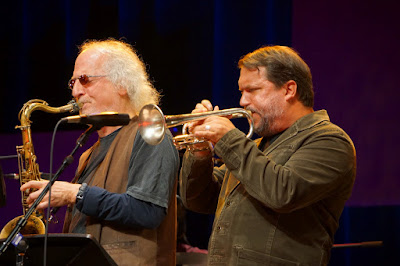 September 7, 2012, I was sitting near the front of the River Run Centre in Guelph, Ontario, Michael New nearby, for ROVA's reimagining of John Coltrane's Ascension, performed by the expansive Orkestrova.

I had known the program was to be filmed. Lyn Hejinian had earlier alerted me to the fund raising campaign ROVA was mounting to make possible an ambitious film project around the piece.
The hall was even more than usually well lit with a striking blue design, and there were five cameras on hand. (We were particularly impressed by the overhead dance of the boom camera, which often swung just over our heads for a view corresponding closely to our own.)


And now, the funding campaign and post production complete, Electric Ascension has been released. 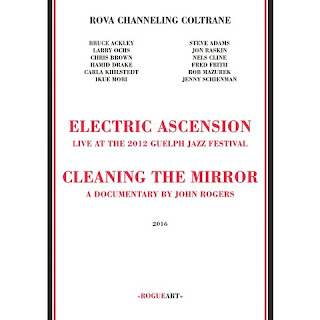 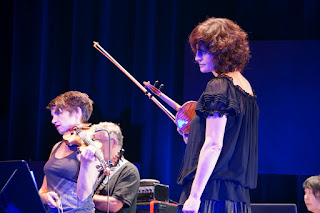 Available now from Rogue Art, the package includes three disks, with an accompanying essay by Stuart Broomer. Disk one contains a standard DVD of the concert, and the documentary Cleaning the Mirror, by John Rogers. The second disk, the one I played first, is a blue ray disk with full surround sound in Dolby 5.1.  This came about as close to the experience I had in the concert hall in 2012 as one could hope for. Disk two also has a distinctive feature which allows the viewer to feature a particular musician, raising that performer's audio for closer study. Disk three is a standard CD with the concert audio. 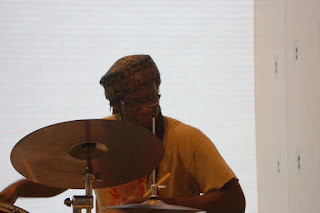 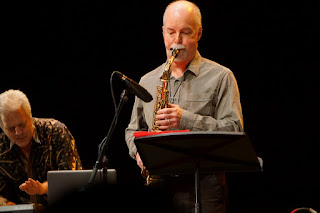 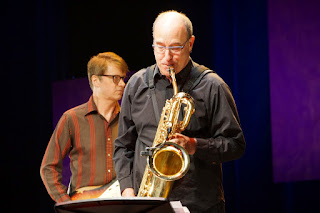 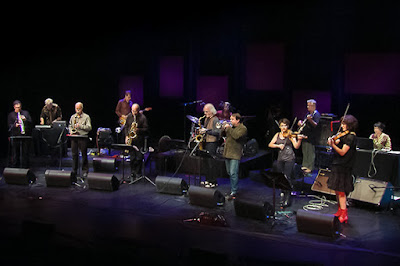 Posted by Aldon Lynn Nielsen at 2:10 PM No comments: