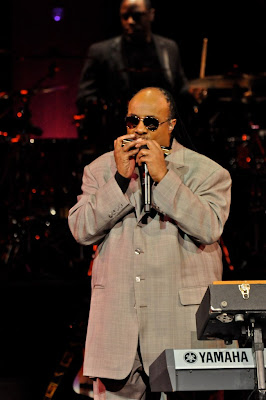 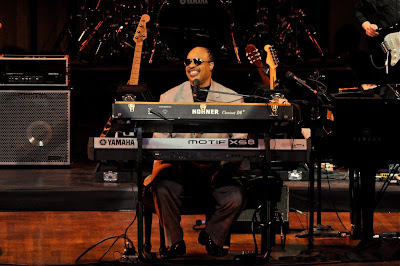 My brother Brian Nielsen took these great photos during a benefit concert for the Duke Ellington School of the Arts.
Note the presence of the chromatic harmonica, of which Stevie remains one of the few masters.
Posted by Aldon Lynn Nielsen at 7:56 AM No comments: 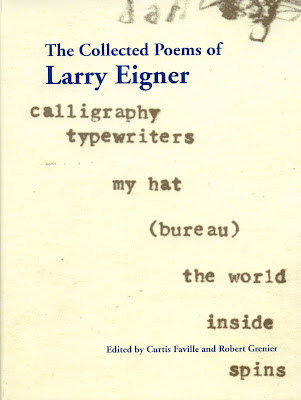 More than three decades have passed since I first came across the work of Larry Eigner. I was reading a remaindered copy of The Gist of Origin (in those days nearly every book I owned was remaindered), in which Cid Corman had offered up a stunning selection from the run of his journal, 1951-1971. This was the context in which I first read Eigner, as Origin had itself been the first context in which many had encountered his poetry starting in 1954. Over the years I made it a point to get hold of each new Eigner book I heard of; I doubt that many heard of them all, they were so many. Still, my only access to his early work, aside from the Origin anthology, had been the Selected Poems edited by Samuel Charters and Andrea Wyatt back in 1972. By the time I found a copy of that book, Andrea had relocated from the San Francisco Bay area to D.C. and had become part of a group of poets gathering in Folio Books just off Dupont Circle. That's where I first met her; she was assembling the pages of a chapbook and stapling them together behind the counter of the store. (Later there was a memorable evening when I drove her and Joanne Jimason over to Annapolis for a reading.)
At any rate, when I saw that an Eigner Collected Poems was about to be released I was taken aback by the announced price, which seemed to destine the book to be a library-only read. But it turned out that the Collected is four beautifully produced hardback volumes, and so turns out to be something of a bargain. Here you can read the book of poems that Eigner published while still a high school student, then follow the evolution of his aesthetic in the years leading up to those Origin appearances, and then through the rest of his long and productive life. The collected includes many poems that had not been available anywhere else, and many pages of holographic reproductions of his typescripts. As a scholar I might wish for more of an apparatus than the Collected offers, but the editors, Curtis Faville and Robert Grenier, have produced a wonderful set of volumes that I will be rereading for years. These things are hard to judge. At this price and bulk, the Collected is not going to wind up in many readers' book bags (let alone KINDLES); if it was going to be mostly a library edition, maybe more scholarly equipment might have been a good idea. On the other hand, these are books designed to afford an immersive reading experience.
Talk about interactive:
a l l r i g h t
there is no cure pieces
slide around
the skies clouds
and smoke
a pure clothing
what we need is some
laboring god
and they solicited
poems
about love
hiding the point
when I submitted
(June 25, 1962)
Posted by Aldon Lynn Nielsen at 9:00 AM 1 comment:

Those of you who have not already found their way over to the HEATSTRINGS pages at Penn Sound should navigate over to that site and see what's on offer:
http://writing.upenn.edu/pennsound/x/Heatstrings.php
When I visited Penn last Fall to record episodes of Poem Talk and Close Listening, Charles Bernstein suggested that I should post selections from my extensive archive of audio recordings to the Penn Sound site, and I've been slowly building the selections ever since. Every week or so you'll want to stop by to see what's new. There are readings by David Bromige, Michael Davidson, Sherley Anne Williams and many more, as well as interviews with Will Alexander, Nathaniel Mackey and others.
In the wake of this week's delightful news of a Pulitzer Prize for Rae Armantrout's Versed, you may want to take the time to listen to a recording I posted not long ago featuring a panel of critical presentations by Rae, Charlie Altieri and me. This was recorded in San Diego back in May of 1992 and includes the discussion afterwards. It would seem that Alicia Ostriker was not entirely in agreement with us, and there's a brief discussion of the sexuality of the little engine that could that's not to be missed.
Posted by Aldon Lynn Nielsen at 5:49 PM No comments: 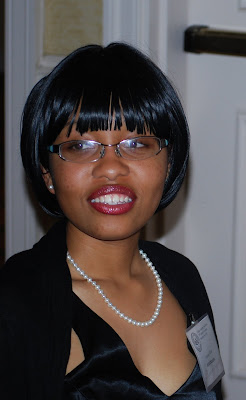 The glad occasion of the annual meeting of the College Language Association is also the anniversary of this blog, which had its origins in a hotel room in Birmingham, Alabama. Since getting a smart phone, I'm too cheap to spend the money on hotel internet access, and so I waited till I returned to Penn State to post these photos from the conference. 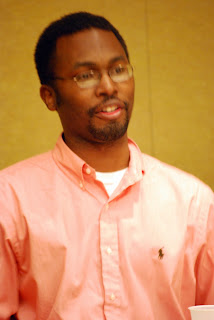 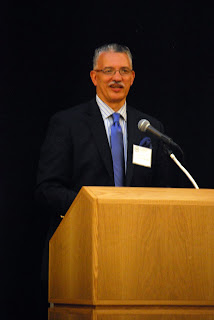 My room this year was in a hotel overlooking the Brooklyn Bridge, and yes, I would buy that thing for the right price. Brooklyn College was our host, and the reception took place on their campus, in a room I'd last been in for the Larry Neal conference a couple years back. 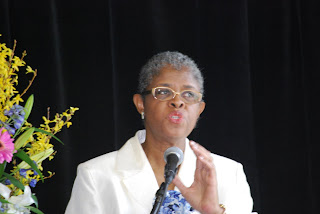 The conference itself was, as always, useful and inspiring -- My only complaint: not nearly enough work on poetry. But there will be more, judging from the response to Howard Rambsy's report on his recent project, which involves sharing the sixty volumes of contemporary poetry he's collected since 2001 with a wide variety of students and community members. 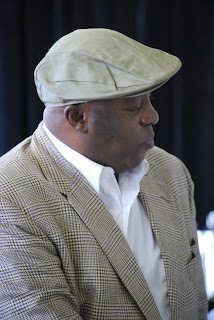 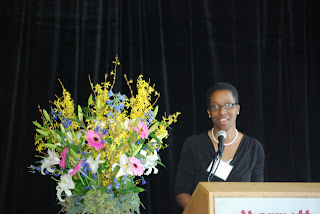 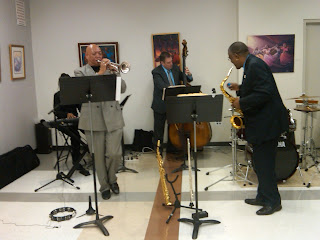 The annual Langston Hughes Society luncheon featured a performance of a one-man show built out of the texts of the Simple stories. 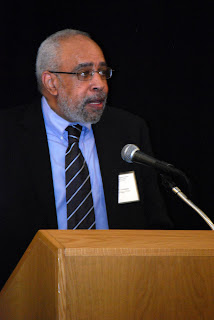 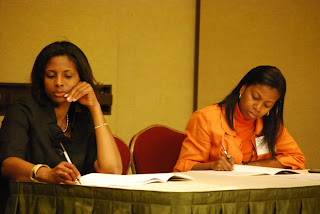 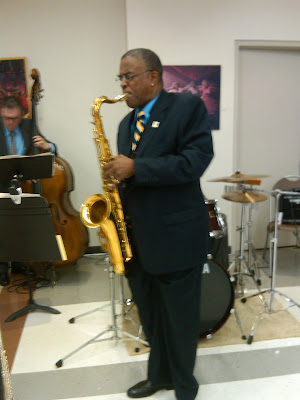 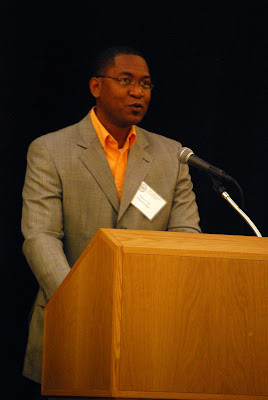 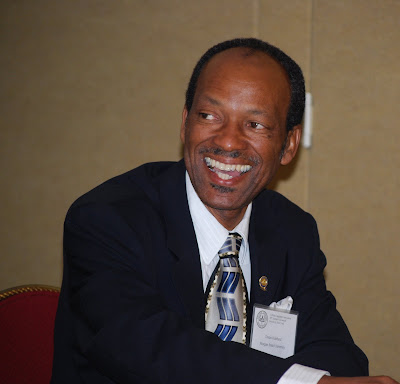 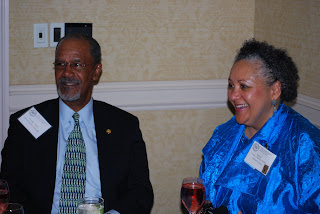 Next year's conference will return to South Carolina, as Warren Carson takes over the CLA presidency, bringing the meeting to the quite literally named University of South Carolina Upstate. Watch the CLA web site for the call for papers and other information about the organization. 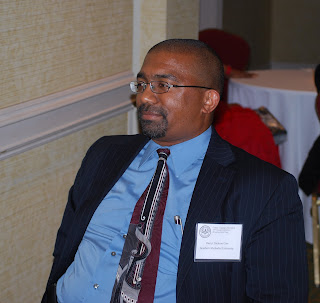 Posted by Aldon Lynn Nielsen at 3:14 PM No comments: