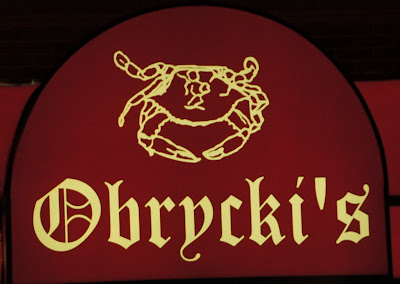 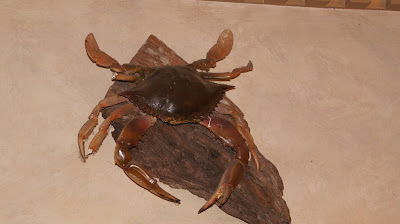 I was never there for Thanksgiving dinner, but I wish I could have been. This month, what was easily one of the best sea food restaurants in the world closed after decades on the same street in Baltimore. These photos were taken on earlier visits (mostly while waiting for friends to get there -- I'm always early and friends are always late), as I went there for dinner nearly every time I was in Baltimore. 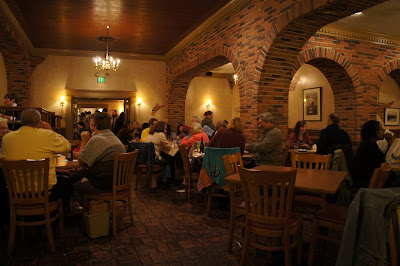 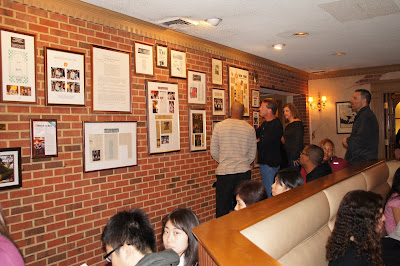 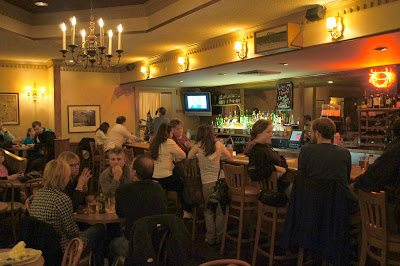 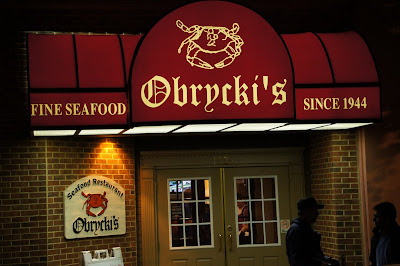 Having been born in Nebraska, I found the whole idea of eating a crab, or even seeing one, foreign when my family moved to the D.C. area, but it wasn't long before my friends overcame my initial reluctance (well, those friends who weren't trying to scare me off with tales of "dead men's fingers" and "mustard"), and soon enough I was making runs to places like Ernie's Crab Shack or down to the D.C. Marina to get steamers. Once my brother Dennis and I decided to get steamers; then decided to go to the movies. My apartment had no equipment for crabs -- we left them in the bathtub when we went to the movies, then had to recapture them upon our return. I had no crab pot, so we used a roasting pan -- you get the sorry picture.


But Obrycki's easily had the best crabs, crap cakes, scallops, shrimp you could ask for, and it was always a fun place to be. I'll miss it on my next trip to B'more -- though there will be a smaller version at the airport where, it is promised, we will at least be able to get good crab cakes.
Posted by Aldon Lynn Nielsen at 6:05 PM No comments:

In the wake of the breaking news of the Penn State disaster I have learned that as long ago as last March the Harrisburg newspaper carried revelations of the fact of the grand jury investigation in progress into complaints about serial child abuse by former coach Sandusky. I confess that I do not read the Harrisburg papers, or even the State College paper; a negative effect of my commuting life.

But two things are immediately evident. Schultz, Curley and Spanier all knew that a grand jury investigation was in progress, and so far as I can tell did nothing to prepare Penn State for the horrible revelations that were sure to come. And I am certain that there are people in our university administration who follow the news from the state house and environs as part of their job responsibilities. What did they make of this news? Why was no action set in motion to meet the day when the grand jury report would be released? Why was our institution left so exposed and so vulnerable?

I have no idea if such questions will be included in the investigation now under way by the trustees, but they should be.

Posted by Aldon Lynn Nielsen at 9:56 AM No comments:

Our Students Show Their Colors

It's a sea of blue at Penn State's football stadium today as our students show their support for the victims of Jerry Sandusky, and all victims of child abuse.
I don't know if there was anything to the TMZ story last night -- As the players were getting off the bus, I saw only one knucklehead (not a player) walking with his sweat shirt lifted up to expose a white shirt -- Everybody else was prayerful and wearing blue --
Thanks to the students who organized this way to show what we really feel this weekend.
Posted by Aldon Lynn Nielsen at 9:07 AM No comments:

We take solace where we can find it. This week, one of the only sources of pride I've been able to find at Penn State has come from the students. Several groups of students, entirely on their own initiative and prior to the decisions of the Trustees, began organizing a drive for students attending tomorrow's Penn State/Nebraska game to wear blue rather than the usual white, as a symbol of their support for the victims of child abuse. I don't have tickets for the game; still, I'll be wearing blue all day.
But now I read this on the TMZ web site:
"Multiple sources connected with the football team tell TMZ ... coaches held a meeting with players today and told them their friends and family should show support for ousted coach Joe Paterno by wearing white to the game on Saturday."
TMZ has been wrong about things before; I pray that this report proves unfounded. If it is true, though, the entire coaching staff should be fired, before the game.
I'm sorry, but there is no excuse for seizing upon this moment and wresting it from the good-hearted students who are trying to bring a modicum of dignity back to our university.
Tonight? I'm taking my candle and walking out into the darkness of the campus night, looking for an honest man.
Posted by Aldon Lynn Nielsen at 5:36 PM No comments:

IS THIS THE KIND OF SCHOOL PENN STATE IS?

After watching the broadcast of the Penn State Trustees press conference a few minutes ago, I turned to CNN -- I'd seen their truck parked at the base of campus earlier today and knew that they were on hand. Sure enough, they had cameras and reporters on the scene as students began gathering outside Old Main in response to the news that both President Spanier and Coach Paterno had been dismissed.
I'd been worried this morning when I saw the photo of Coach Paterno on the front page of the Daily Collegian, surrounded by supportive students last night outside his home. I appreciated the emotions of the students; I understood why Paterno would be grateful to those students. But I knew that the image of a smiling Coach Paterno with his arm raised in the midst of the crowd was precisely the wrong image for Penn State to display to the world in the unfolding scandal of sex abuse of children on our campus.
Tonight on CNN I see an outpouring of support for Coach Paterno outside Old Main, and I have to think this is the wrong way to show that support. And what I am hearing from the journalists underscores that concern.
As the camera showed shouting students holding up signs, the anchor asked the on-scene reporter for help understanding what we are seeing. The anchor implored the reporter to help viewers wrap their heads around the seemingly inexplicable mood of the crowd. Why, she wondered, this mood, this spirit, when the events at the heart of our troubles are the rapes of young boys on our campus and the utter failure of our trusted leaders to respond to those events appropriately. Is this the kind of school Penn State is?
That was her question. I hope our community will quickly show that the answer is "no."
Posted by Aldon Lynn Nielsen at 7:44 PM No comments: 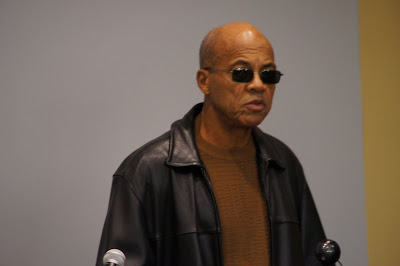 BEFORE the stream of bad news began breaking over the once Happy Valley, we enjoyed a wonderful visit from John Edgar Wideman. The novelist spent several days in residence, working with our graduate creative writing students, and he gave two readings. The first was from what appears to be the new novel in progress, an intriguing further meditation on fathers and sons following the earlier Fatheralong, incorporating materials from the court case and news coverage surrounding the murder of Emmett Till. This included as well material concerning Till's father, who appears twice in Pound's Pisan Cantos. At the second reading Wideman presented a work of short fiction in progress. As busy as he was kept by our creative writing folk, Wideman found time to have a dinner with graduate students working in African American literature, during which he generously gave of himself in a far-ranging discussion.

CLICK HERE FOR A SHORT SAMPLE OF WIDEMAN'S COMMENTS INTRODUCING HIS SHORT FICTION. 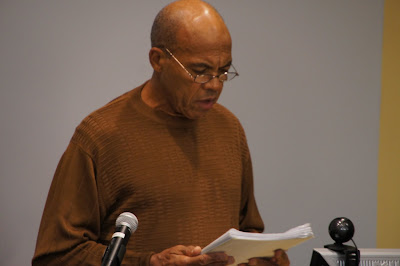 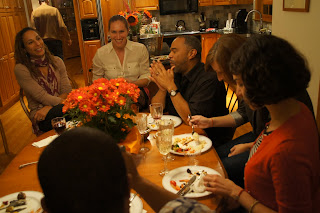 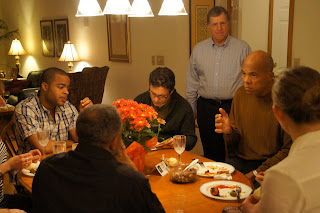 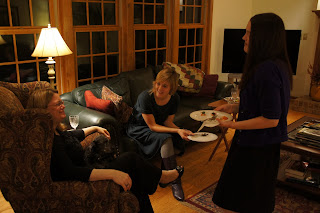 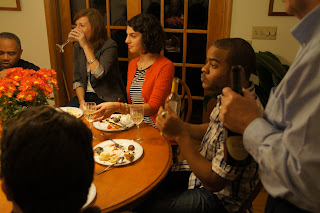 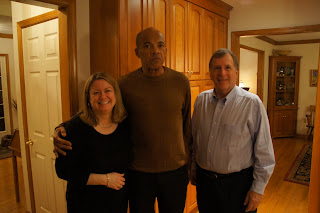 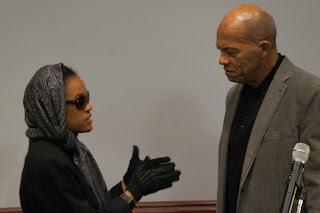 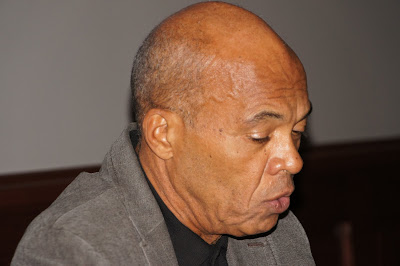 Posted by Aldon Lynn Nielsen at 2:25 PM No comments: