Nathaniel Mackey was one of the invited writers at this year's University of Louisville Conference on Literatures after 1900 and so I seized upon his presence for the introduction to my own plenary presentation. I began by showing a short video clip of the National Book Award ceremony last year when Mackey accepted the award for his volume of poetry SPLAY ANTHEM. The first thing Mackey had said upon arriving at the microphone that evening was, "Now We Know," which was also the title of my lecture. Here is the opening:


Along with the audience in New York, we knew in this moment that Nathaniel Mackey had just been awarded the National Book Award for poetry. Those of us who track such matters knew in this moment that this was only the third time in the history of the National Book Awards that a black poet had been so honored. There were no African American artists selected for the prize in the forty-nine years from its inception in 1950 to 1999, when the poet Ai was honored for her New and Selected Poems. The following year, Lucille Clifton was presented with the award, again for a volume of New and Selected Poems, and then there were no more black winners until Mackey took the stage in 2006 to receive the award for Splay Anthem, marking the first time ever that an African American poet was honored for something that was not a selection from his life’s work. And some of us noted that possessive pronoun as well; "his." It made a difference. This was the first time that any black man had ever received the National Book Award for poetry. For that matter, we’d have to look back to 1990's award in fiction to Charles Johnson to find any National Book Award in any category to any black man. Before that, there had only been the 1953 award to Ralph Ellison. There were other African Americans honored. Both Alice Walker and Gloria Naylor won in fiction, and the foundation’s Medal for Distinguished Contribution to American Letters has gone to Gwendolyn Brooks, Toni Morrison, and the redoubtable Oprah Winfrey.


We knew something else as well, in that moment of the award. Despite the fact that the National Book Award for poetry had in its early years gone to William Carlos Williams, Wallace Stevens and Marianne Moore, despite the appearance among the lists of honorees of a John Ashbery, for the most part the judging panels have gone straight for America’s middle brow jugular. Though it would be hard to argue against the quality of the winners over the years, it would be equally difficult to justify the continued neglect of the poets who were most insistently exploring the territories outlined by Williams, Stevens and Moore, let alone Sterling Brown and Melvin B. Tolson. Mackey’s award was, then, a perfect storm of the unexpected and the overdue. It is not hard to point to various factors that lent themselves to this felicitous outcome: Splay Anthem was, unlike most of Mackey’s work, published by a venerable New York press. The judging panel for 2006 included other poets more likely than many to be conversant with and sympathetic to the adventurous and demanding aesthetic of Mackey’s serial lyric inventions. But, should we allow ourselves to admit it, there is something else we knew immediately about the rarity of Mackey’s 2006 honor.


In Paracritical Hinge, Mackey comments that "the relevance of experimentalism to African American writing and of African American writing to experimentalism needs to be insisted on and accorded its place in the discourse attending African American literature and in the discourse attending experimental writing" (243). Suffice it to say that neither the National Book Awards nor America’s literary/critical apparatus at large has shown itself to be in any hurry to meet with Mackey’s imperatives. We haven’t far to look for explanations for this phenomenon. In a year that has seen such an enthusiastic response to the candidacy of Barak Obama, our national tendency to congratulate ourselves must be leavened by the memory of the moment in which fellow Senator Joseph Biden felt obliged at the beginning of the campaign trail to point out for us that Obama is, as Biden would know, "articulate." (Robert Novak, on the eve of the New Hampshire primary, felt obliged to repeat and underscore another of Biden’s observations, that regarding the cleanliness of the honorable Mr. Obama). Even a year that closed with the truly remarkable event of the release of a major feature film with Melvin B. Tolson as its subject, under the auspices of National Book Foundation honoree Oprah Winfrey, left an odd taste in the mouth. There appeared to be a strange skittishness among all those involved with the film about Tolson’s sheer intellectual force, particularly as evidenced in his poetry, which is completely absent from the film. There is a long-standing problem in America, stretching back to the day of Phillis Wheatley, to whom Thomas Jefferson refused the honorific of "poet", contending with the fact of black intelligence. In a short essay on the large subject of "black interiority," Mackey comments that American audiences have been haunted by "a fearful, grudging acknowledgment of black intelligence (the ‘hive of subtleties’ that Babo’s head is said to be in Herman Melville’s ‘Benito Cereno’) (Paracritcal 202). Of course, another thing that we know is the fate of Babo. Nathaniel Mackey’s presence on the New York stage as recipient of the National Book Award for so deeply thoughtful and inventive a book as Splay Anthem was, then, belated, let’s hope not grudging, acknowledgment of something that had only rarely been apprehended, let alone celebrated, by the National Book Foundation, the figure of the black intellectual. It was, we might say, a moment of discrepant engagement on the national stage, one which threw into sharp relief a history of denials and deferrals. Mackey has written of discrepant engagement as a mode of critical action that "dislodges or seeks to dislodge homogeneous models of identity, assumption of monolithic form, purist expectation . . . " (Discrepant 189). In my time here today, I hope to perform an exercise in discrepant engagement by telling a story, one that does not share a stage with Nathaniel Mackey but participates in a certain staging of intellectual history and race.

From there, my paper launched into an itinerary that included Ornette Coleman, Jacques Derrida, and Russell Atkins's 1950s work on concepts of deconstruction.

The paper engaged in a brief fantasy built around the possibility that Derrida could have seen Atkins's essays during his first trip to the United States, some years before Derrida himself began to write of deconstruction. In the end, my paper was not really so much about Derrida's history and race as it was about us, about how we read intellectual history, about how we fail to read black participation in crucial developments in theory and philosophy, about how our understanding of ourselves and of the past might alter were we to read more fully . . . . 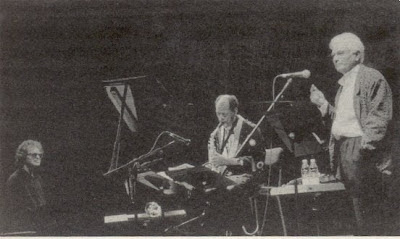 Thanks for posting a bit of your talk, which sadly I missed, trying to spell my wife from the ongoing labor of parenting. Hope it was a blast!@

nice blog, do check me out one day, mabe you can read one of my books one day, hey are displayed on my blog, maybe even exchange blog rolls if you like what u read - EMAIL ME TO CONFIRM