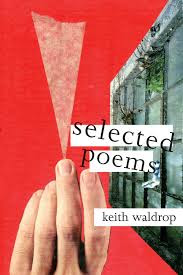 "Almost everybody, you
know, is dead."

These many years later I still recall the force of those words against my eyes as I stood in a used book store staring at a page of Keith Waldrop's so wonderfully titled book The Garden of Effort.

That was my origin story, and those carefully placed commas simultaneously alluded to the sound of the lines as spoken, and kept them from meaning what they might if unpunctuated.

Decades later I found myself lingering over a line in Claudia Rankine's Don't Let Me Be Lonely: "Is everyone you know alive?"

It was that reading in The Garden that sent me East of Eden to find the rest of Waldrop. What I came to first was his first, A Windmill Near Calvary.


By then I knew, too, of Rosmarie Waldrop, and it was at a reading of hers that I met Keith. Rosmarie was part of an Emily Dickinson program at the Folger Shakespeare Library.  I lived within walking distance of the Folger in those days, and made sure to be there. Keith, it turned out, was taking a train from Providence to meet Rosmarie, and was himself ambling over from Union Station, and we were introduced at the reception.

I would have gone on reading both poets whether I'd met them or not, but I have enjoyed their hospitality in Rhode Island ("Rogue Island" was what the Puritans in Massachusetts called it) and was able to return the favor at least once. 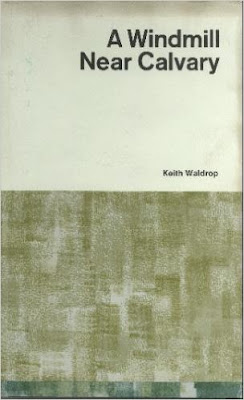 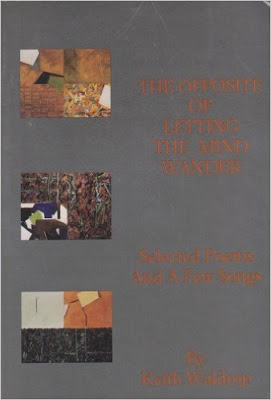 In 1990, Lost Roads published Keith's The Opposite of Letting the Mind Wander: Selected Poems and a Few Songs, and I've taught that book in classes a few times.

This is the real
morning, and
not the other. There
is no special value in
your fear. To "avoid
unlucky words" is to
"keep a religious
silence."

That was selected from A Ceremony Somewhere Else. As the titles hint, Waldrop's concerns have stayed the course even as his poems have tightened and tautened. No slackness with age --

And now we have this new, beautiful and generous Selected, running from that first Windmill and Windfall Losses (lots of wind power in here) through 2013's Also a Fountain:

"A relativity of the taut string."