LORENZO THOMAS - "But Which Way Is Redemption?" 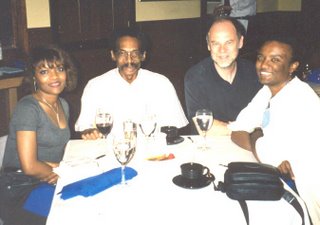 For a couple of years, Lorenzo Thomas and I conspired to be in Boulder, Colorado, at the same time when we could. This began when my wife, Anna Everett, was teaching in Film Studies at the University of Colorado. During our stay there, we of course took advantage of the programming at Naropa, which included Lorenzo nearly every year. From that first summer, we tried to arrange our visits for the Fourth of July so that we could cap the evening with fireworks over Boulder. This photograph shows one of our last visits. Here we're at dinner, joined by Harryette Mullen, who was also visiting Naropa that season. It really was a poetry family affair. These were great poets and great company.

I had been reading Lorenzo Thomas's poetry for many years before I first met him. His chapbooks and selected volumes were among the small number of small press titles that would show up in book stores in D.C. in those days, and his was the kind of work that made you seek out more. It wasn't until the latter part of the 1980s that I met him, though; we were introduced to one another by Charles Bernstein in a hotel lobby during one of the MLA's visits to D.C. - People often wonder at my love of academic conferences, but meetings like that one are among the reasons I try to stay active in these professional associations. Over the years, conferences were where Lorenzo and I visited with one another. We also increasingly found ourselves working together on conference projects. There were so many occasions when we spoke together, or when one of us was the respondent to the other, that we were becoming a sort of critical/poetic tag team at these events. Lorenzo was somebody you would always learn something from, and he was also among the most generous people I've ever known. Much of my work on poetry and music was helped along by Lorenzo's willingness to share his collection of recordings with me. Typically this would happen when, over drinks (as in the photo above) I would ask Lorenzo if, say, he'd ever come across an LP titled NEW JAZZ POETS. He would muse a moment, then invariably came the same answer: "I think that may be in the closet in New York. I'll ask my brother to dig it out for us." Lorenzo's brother, Cecilio, a person every bit as kind and generous as Lorenzo, was the artist whose work appears in so many of Lorenzo's publications. About a month later, I would get a cassette tape in the mail.

I was able to help a bit in Lorenzo's work as well. On several occasions I was a"blinded" peer reviewer for Lorenzo's critical works. A particular pleasure was being able to do that work with the manuscript of EXTRAORDINARY MEASURES, a book increasingly cited by other scholars.
When Lorenzo died this past July 4th, I had just read the manuscript for a book about music that he had submitted to the University of Michigan Press. I've been in discussions with the press since Lorenzo's passing, and I am happy to report that they are willing to go forward with the project. In the coming months, I'll be working to get the manuscript into final shape for publication. Barry Maxwell is also working on a collection of Lorenzo's essays and talks.

A few years back, Barry organized a panel on Lorenzo's work at the American Studies Association meeting in Houston, where we were joined by Kalamu ya Salaam and Maria Damon. We had a great dinner afterwards with Lorenzo and Karen, and Roberta Hill. Wish to god I'd had my camera along that time. Jim Smethurst has organized a panel in Lorenzo's memory that has just been approved for the next American Studies meeting at Oakland in the Fall. 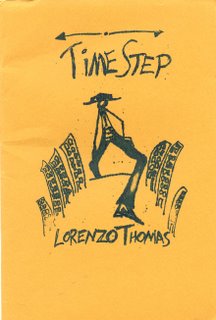 It is as a poet, though, that Lorenzo Thomas has the greatest claim on our attentions. The last serious time I spent with Lorenzo was at the conference held at Miami Univeristy in Ohio that has since been memorialized in the anthology RAINBOW DARKNESS, edited by Keith Tuma. Lorenzo read his poetry and delivered a keynote address, included in the anthology. You can find information about the book at: http://www.orgs.muohio.edu/mupress.

Lorenzo's last pulished full colletion of poetry was DANCING ON MAIN STREET, which includes the chapbook shown here, TIME STEP, and was published by Coffee House Press. John Ashbery had this to say about Lorenzo's final book: "Lorenzo Thomas's poems have a graceful New York School nonchalance that can swiftly become a hard and cutting edge when he writes of the African American experience, especially in his adopted home of Texas. 'This useless clairvoyance/is embarrassing,' he confides. Yet Thomas's brand of clairvoyance is not only useful, but beautiful."— The book is still available, and you can find information bout it at: http://www.coffeehousepress.org/dancingonmainstreet.asp

In the future, I hope to put up a Lorenzo Thomas web site. For now, here is some of his work.

There are no gospel singers
Anymore

So many times
People come up to me
And say, Billy
Hey wait a minute
You not Billy!

You can see the new ballpark
Just past the Courthouse

But which way is redemption?

The backward see
The wise don't say a word

Three dreams, one foolish
And two meaningless
Are haunting me, disturbing me

One says
A golden road was plotted out for you
In dreams, of course

But that's not where you are
When you awaken

Such are the baffling deficits that time imposes

What is this shadow
Cast across the coming season?

In the still watches of the Negro night,
Fear rising like mist off a bayou,
The danger in the world
Is seeing it as two extremes

Is this full moon so indiscriminate
That even liars prosper
if they have launched
Their web with the new moon?

This autumn equinox
A harvest of deceit
Leaves the ground rugged.
The harvest done, the fields outside the city
flat and sere
A single egret stands in the parking lot at the Post Office
Poised and confused

The world automatically recoils
Into itself

People throughout all history
Have lived in ashen cities
or died in them
Marcel Duchamp was joking
Wasn't he, as always when he said
Dust-covered glass
Might offer auguries
Of our predicament


How have my people been distracted so
They don't care any longer who they are?

How so misled that they believe
Punishment does not apply
To crimes committed in their name?

Must war morph from Nintendo game to spectacle
To get attention?

If you believe in magic, yes

And that same magic, yes
Could stop the rush to madness, too

But here's
The truth:


You have the right to keep your mouth shut

Across the room
A person looking like a crazy version
Of somebody you once knew
Might be our Savior
One who can draw fire
Out of ashes
At least a lover, maybe
The one to take you up a little higher
Or let you down easy.

But don't look this way,