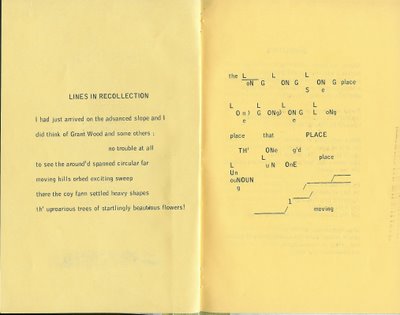 For more than five decades now, Russell Atkins has been pursuing the path of greatest resistance as an avant garde poet working out of Cleveland, Ohio.

A central figure in the important FREE LANCE WORKSHOP that published a journal out of Cleveland for many years, Atkins is a poet, composer, theorist and editor who has never abandoned his life-long committment to the experimental. He was already publishing concrete poems and syntactically disruptive verse forms as early as 1948, in journals such as EXPERIMENT and BELOIT POETRY JOURNAL. He was also in correspondence with such major figures as Marianne Moore, who performed one of his poems on her radio broadcst, and Langston Hughes, who included Atkins's work in such collections as NEW NEGRO POETS USA.

Here, appropriately enough, is the title poem from HERE IN THE:


It's Here In The


Here in the newspaper -- wreck of the East Bound.
A photograph bound to bring on cardiac asthenia.
There is a blur that mists the pages:
On one side's a gloom of dreadful harsh,
Then breaks flash lights up sheer.
There is much huge about, I suppose
those no's are people
between that suffering of --
(what have we more? for Christ's sake!
Something of a full stop of it
crash of blood and the still shock
of stark sticks and an immense swift gloss
And two dead no's lie aghast still
One casts a crazed eye and the other's
closed dull
the heap twists up
hardening the unhard, unhardening
the hardened 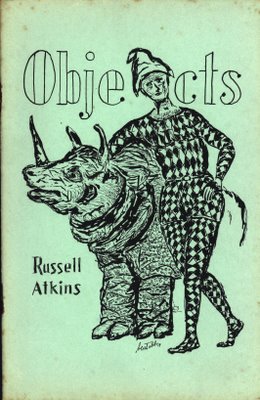 You can also read or download a generous sampling of Atkins's work from Craig Dworkin's Eclipse site, which you will see listed over there in the sidebar. Craig's site provides scanned images of the original books, many of which are extremely hard to locate chapbooks. Craig's note to PODIUM PRESENTATION says, "Back cover fancifully lists Atkins as the author of: The Hypothetical Arbitrary Constant of Inhibition; A psychovisual Perspective for 'Musical' Compositions; and The Invalidity of Dominant Group Educational Forms." I'm not sure why this is described as "fanciful," since those are in fact the titles of earlier works by Atkins, which I analyse in the chapter in INTEGRAL MUSIC. 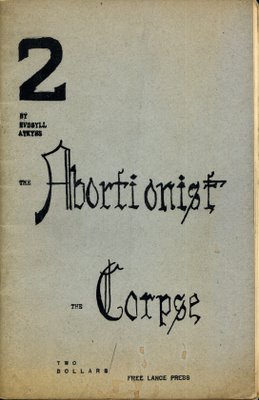 Some years ago, Paul Breman published a late addition to his invaluable HERITAGE series of African American poetry pamphlets from England, SEVEN @ SEVENTY, in honor of Russell's seventieth birthday. Atkins is now eighty years old and still living in Cleveland. I spoke to him on the phone not too long ago and he is doing well. Having been neglected for so many years since the FREE LANCE journal stopped publishing, he has been gratified by such recent attentions as a special section of the journal CRAYON devoted to his poetry and criticism. Atkins has recently been contributing poems to Kenneth Warren's little magazine, HOUSE ORGAN. The current issue (Number 54) includes Atkins's "Impromptu on 'Oft Thought.'" He remains one of America's most distinctive writers.
Posted by Aldon Lynn Nielsen at 7:52 AM

It would be great if the Atkin's photo was larger so we could get a good look at his face. -- Rudy

Rudy, the photos of Russell are always decades old. I am posting a recent photo of him where this was shared on Facebook. I think his face in age is beautiful.