GEOFFREY JACQUES - JUST FOR A THRILL 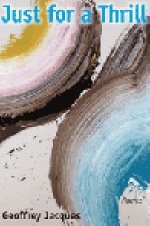 Just to reiterate a bit, the book I've been reading by Geoffrey Jacques is something you will want to give a careful look. (and that art work I've just turned into a triptych, by the way, is by Ed Clark)

Jacques is one of those poets who has been working away quietly for years, evolving a poetry of stunning lyric intensity pretty much outside the apparatus of the Po-Biz world. This generous sampling of his poetry has just been published by Wayne State University Press.

My first enocunter with Geoffrey Jacques came more than a decade ago when I was in Los Angeles participating in an NEH summer seminar directed by Samuel Weber at UCLA. Anna and I had been in the habit of attending the Thursday afternoon jazz concerts sponsored at the Museum of Contemporary Art in those days, and made a point of introducing friends to the series. One week, we got amibitious and invited Weber and his wife, friends from the seminar, and Harryette Mullen, then new to L.A., to join us for jazz and dinner. Harryette called up to say that a poet friend was visiting and so we added him to our party.

And this turned out to be Geoffrey Jacques. As is customary when driving across Los Angeles, something that affords a great deal of time for in-the-car conversations, we were all talking about our various interests and current projects. When I learned that Geoffrey had spent a good part of his life in Detroit I began quizing him about associates of C.L.R. James he might have met there. Turned out that Geoffrey not only knew quite a few of them, but he had been a long-time reader and admirer of James. A bit farther along highway 10, I mentioned a project I was working onat the time, investigating the poetry and career of Cleveland avant garde poet Russell Atkins. I then heard Geopffrey Jacques utter a sentence I had never heard spoken by anyone in my life. "Russell Atkins is my hero," said Geoffrey.

Not only had I never before met anybody who knew the names of both James and Atkins, but here was somebody who had made careful study of both writers. This was somebody I had to keep up with.

So, over the intervening years, I've been reading whatever work of Geoffrey's I came across, both critical work and his own increasingly striking poetry. We see each other at the occasional conference, but it's in writing that I have come to know and value Geoffrey Jacques.

And now we have this book of poems that for the first time will give a larger audience the chance to see what he has been up to all these years. Earlier publications, including HUNGER AND OTHER POEMS and SUSPENDED KNOWLEDGE, have long been treasured by avid followers of the small press world, but here we have a substantial selection of his poetry from a university press that should get around much more than the earlier volumes.

The book comes with words of praise from Ammiel Alcalay, enough reason on its own to give the book a try. There's also a foreword from Nathaniel Mackey, who, like me, hopes that this will prove to be the breakthrough book for Jacques.

Here's just one selection -- I like this poem for the way it brings jazz, Garcia Lorca and Frank O'Hara back together again in a wholly original lyric mode:

you could find the shimmy

in sound & garlic, in green curtains

in mediocre speeches in faded magazines

the hazy Statue of Liberty streaks above cracked windows

up over the withered-winged yellow lights

in an old stick striking gold--

or try this one for an instance of sharp political lyric:

lynchings have occurred because Negroes painted their homes

aware of the scheme, some aides are told

this personal quality is ambivalent

on a streetcorner way too far from Haiti

the drilling goes on into the night

lending the scene an elegant aura

the sweeping views will substantially change the skyline.

for information on how to order a copy of JUST FOR A THRILL, click on the link to Wayne State Press above.

Posted by Aldon Lynn Nielsen at 9:05 AM

Thanks for sharing this! This review comes right on time.