WEEK-END AT THE DRIVE-IN 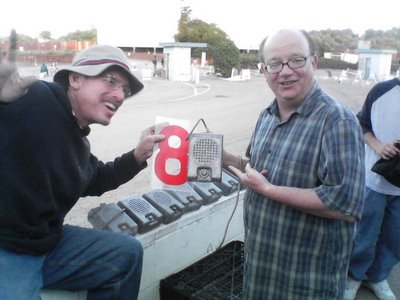 Friday night, Anna and I did something we've never done together before. We went to the drive-in movies. Our first date in D.C. had been a movie night, at the old Biograph Theater in Georgetwon, now, like so many of my hometown's great theaters, converted to a drug store. But we'd never been to a drive-in. They'd all closed up before we'd ever met each other.

They've closed up everywhere, taking with them decades' worth of memories and romance. Many of them have come to have an odd sort of second life, hosting weekend swapmeets. That's what we found when we moved to Santa Barbara some years ago. As you drive up the highway to the campus of the University of California in Santa Barbara, you'll see two old screens off to your right, still standing, but slowly fading in the California sun. We've often looked over to them and thought how it would be fun to see a movie there. The place had screened its last outdoor film more than two decades ago.

But the students at UCSB are an enterprising lot, and some of them have come up with a wonderful project. Adam Grossberg and Ari Phillips hatched a plan to spend their first post-graduation months touring the abandoned drive-ins of America's driven past, making a feature-length documentary in the process. If you visit their website (Irrelephant Productions), you can read about their plans. Over the coming months you'll be able to follow them on their itinerary and read their blog as they meet the ghosts of movies past and talk with owners, staff people and the folks who made the drive-in their destination for so many years.

To kick things off, they did one of the most satisfying things I've seen anybody come up with in quite a while. They reopened Santa Barbara's drive-in for a night, and the commuity turned out, as you can see from this cluster of cars around the old concession stand. 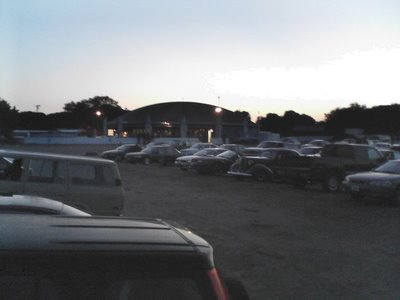 Part of the challenge facing these young folk was the difficulty of replicating the drive-in experience so many years after all the equipment had been removed. Those metral poles we all remember that had the little metal speakers on them are still rooted in the ground, but the speakers were long gone and the wiring was shot. Even that became part of the fun Friday. At the top of the blog you can see Joe Palladino, a long-time staff member of UCSB's Film and Media Studies Department, purchasing one of the old speakers. Anna joked that some students might think it was an early prototype for the iPod --

Which leads us to the clever solution the graduating students came up with after days of field testing. They set up a laptop, planted a good quality data projector on the roof of their car, and used a small FM transmitter to broadcast the soundtrack to the radios in all our cars. 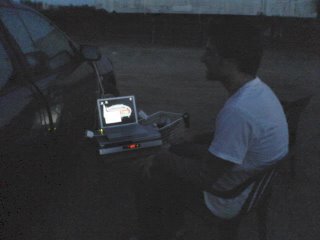 Just like in the old days, they played music in the minutes we were all waiting for the sun to go down. Since there was a nearly full moon, it took a while to get dark enough, and the mingling crowds used the time to reminsce about their own drive-in pasts, and to talk with their children about what these places had meant to us all. 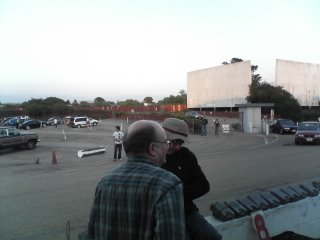 Somehow the organizers had rounded up a selection of old shorts and ads that they screened prior to the main feature. I even found myself laughing out loud when the concession ads came up. You remember those? Dancing bags of popcorn, acrobatic candies, singing sodas, all interspersed with a countdown telling you how many miutes you had to make it back to your car before the movie started.

We even took turns hooting at the late arrivals, whose headlights interfered with our view.

In retrospect, I'm sorry we didn't think to sneak a friend in the trunk of our car, except that our car doesn't have a trunk, and the movie was free anyway -- Still, it was great fun to get back into this spirit again -- a night of film under the stars. Many communities, including Boulder, Colorado, have started a tradition of screening outdoor films in the summer, usually against the side of a building. I remember a showing of METROPOLIS in downtown Boulder one summer. But the drive-in was something else entirely, and for one night, thanks to these industriuous students, Santa Barbara enjoyed a pleasure it hadn't had for twenty years.

It was a great night for all of us, and I'm really looking forward to the documentary these young filmmakers will produce. Keep an eye out for it. Organize a drive-in night in your neighborhood.

Driving away from the drive-in, the Pacific ocean off to our right, I couldn't help thinking that somehow the sky unfolding in front of Anna and me had become a ghostlier demarcation, with keener sounds.
Posted by Aldon Lynn Nielsen at 9:11 PM