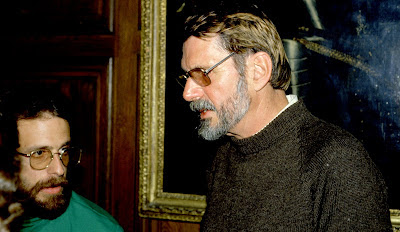 Today's photo comes from the first reading by Robert Creeley I ever attended, at the Folger Shakespeare Library, a venue that, at least in those days, could be counted on to include some of America's more innovative poets along with the usual list of self-absorbed lyric confessors. I had been reading my way through all of Creeley's works, thanks in large part to the large number of remainder book stores that dotted the landscape of D.C. in my student days. My 99 cent hardback copy of WORDS had been a revelation. While I was initially a bit less excited by some of the work in PIECES and AWAY, Creeley rapidly became one of the most important poets to my own evolving aesthetic.
But in my twenties it was all I could do to meekly approach anyone and ask for an autograph.
I got over that, and got to know Creeley relatively well in the following years. On at least a few occasions, he was kind enough to allow me to record his readings for broadcast on the radio program I hosted for five years when I was teaching in San Jose. Creeley was always generous and supportive of my efforts. To my surprise, he would often take time to write an appreciative post card to thank me for having sent him a copy of the poetry newsletter I used to publish, or a small book of poems by a poet I thought he might appreciate, or even just to say a few kind words about a poem of my own he had seen somewhere. I think the last extended conversation we had was at the University of Maine, where we both were reacting to a paper on Williams we had just heard.
Whatever,whatever.
Wherever, what-
ever, whenever-- It won't
be here anymore--
What one supposes
dead is, but what a simple ending . . .
--Robert Creeley
Posted by Aldon Lynn Nielsen at 8:19 AM