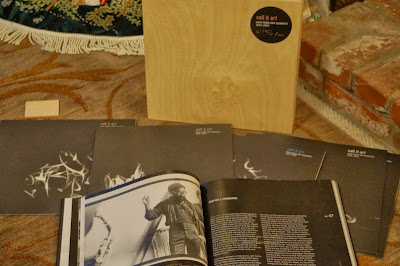 "Call It Art." The phrase comes from Amiri Baraka's poem "Western Front," and it now does duty as the title for this amazing limited edition set of recordings. The New York Art Quartet's debut album on ESP disk included a recitation by Baraka of "Black Dada Nihilismus" -- though I had not heard that till the LP was reissued many years later.  As it happens, I spotted the reissue while in a D.C. music store with Baraka.  He was looking for Weimar era recordings as part of his research for an opera he was working on at the time. I snapped up a copy of the NYAQ album, though I didn't think to get him to autograph it, and have been using that recording in my classes ever since. I had long been a follower of the musicians who made up the Quartet. On that ESP disk they were John Tchicai, Lewis Worrell, Milford Graves and Roswell Rudd. That collection has since been reissued on CD in remastered form (also available as downloadable MP3 files), and the catalogue has been fleshed out by  the CD collections MOHAWK and OLD STUFF. There is also the wonderful 35th REUNION CD, which again includes work by Baraka, with Reggie Workman holding down the bass chair.

But it turns out that there was much more to be heard.

Triple Point Records has issued this limited edition (665 copies) collection of five LPs presenting the full evolution of one of the central groups of post-Ornette Coleman avant garde jazz,  accompanied by an impressive, well-researched book that traces the history of the music.  The book alone is a valuable addition to our knowledge of the era.  The whole set comes inside a sturdy wooden box.

For me, the great treasure is the second LP. This one begins with a set the group played at Judson Hall during the Four Days in December concert series organized by the Jazz Composers' Guild (a continuation from the first LP), then follows with the session the group played in the studios of WBAI radio on January 17, 1965, which again features Baraka. Here we hear the poem "Western Front" as part of a performance of John Tchicai's "Ballad Theta." That's followed by Baraka's recitations of "Bad Mouth" and "In One Battle" during a performance by the group of "Old Stuff." We have long had access to recorings of Baraka reading these poems that same year in San Francisco, but it is tremendously important to have this aural document of the poet's work with these musicians.  The other LPs cover sessions at Rudy Van Gelder's studio, in Michael Snow's loft space, at the sculpture garden of the Museum of Modern Art and in Marzette Watts's loft. The book, by the way, not only gives readers a thorough history accompanied by powerful photographs, it reproduces many of the hand written compositions of the NYAQ members that are played on the tracks.

I hope that this material will be made available one day in more affordable CD formats for the general public.  Till then, get your library to buy a set (that is, if they still have a turntable to play it on.) 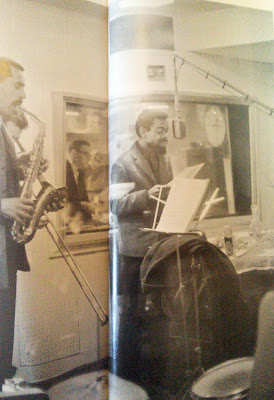 My intentions are colors, I’m filled with

color, every tint you think of lends to mine

my mind is full of color, hard muscle streaks,

or soft glow round exactness registration. All earth

a wild blood train, turns litmus like a bible coat, 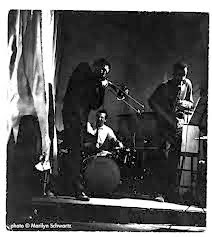