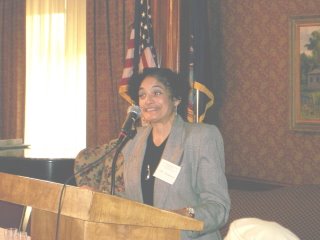 First things first; some technical glitch caused the photo of Mae Henderson to vanish from the first post, so here she is making her opening remarks at Brooklyn College to open the conference on Larry Neal. The next event on the program was the panel I was a part of, and I am offering below just the opening paragraphs of the talk I gave that day:

Be Bop Ghost in the Machine
–Aldon Lynn Nielsen

It is the spectre of the Black Arts, about which so many have the merest ghost of a notion. It is as if, as Larry Neal writes in "Colloquies," when you speak of the Black Arts, "even in your speaking, you are vague and beyond word" (Hoodoo 85). It is as if America had said to the Black Arts, even as we read in later lines from those same colloquies, "I fear your hauntings, even though you are quite familiar. / / Hey! / what star was that anyway?" Has any phenomenon in America’s intellectual history been quite so surrounded by misprisions and misapprehensions, so walled off by presuppositions and the preposterous, so tuned out and turned upon as the Black Arts? Has anything which has so radically altered the thinking of America ever been so hysterically historicized, so manifestly misconstrued? "I was birthed in Conundrum," we read in "Colloquies," so perhaps we should not be surprised by the haunting figures that possess the texts of Larry Neal. Neal’s poems are his familiars, ghostly emanations that visit us now. There are the Ghost Poems, numbered one through four. There are the "Hoodoo Hollerin’ Bebop Ghosts" inhabiting the title poem of Neal’s 1974 book of verses. There is Shine in his "Sermon on Cosmology" wondering aloud "Whose ghosts walks there" (Hoodoo 79), and a check of the reappearance of that poem in Neal’s subsequent selected writings confirms that this sibilance is Shine’s own; he really does ask, "whose ghosts walks?" And that spectral sibilance, that ghost of grammar and consonance, trails in consciousness like something we aren’t entirely sure we heard back then in the sixties, something we have to double back to be sure of.

Larry Neal had a thing for ghosts, something that, to judge from the titles of our papers as you can read in the program, has never been in danger of going unnoticed.. In an interview that first appeared in Drum, cited and sighted again in Mae Henderson’s essay "Ghosts, Monsters, and Magic," Neal reported:

"I remember growing up and hearing ghost stories. Ghost stories are fun. I’m trying to deal with the world of the dead. The dead are not dead"(Qtd. In Henderson 195).

The past, Faulkner told us, is not dead; it’s not even past. In a litany of the departed that haunts that cental essay of Neal’s, he invokes the ghosts of a national tension, and those ghosts are named Nat Turner and Martin Delany, James Monroe Trotter and DuBois, what Neal terms "a whole panoply of mythical heroes from Brer Rabbit to Shine." And then Neal delivers the burden of that past into the present. "These ghosts," he writes, "have left us with some heavy questions about the realities of life for black people in America" (Visions 8). Those questions remain heavy in the twenty-first century, and no amount of rapping has dispelled them.

There was a time when rappings were thought to be manifestations from the spirit world. I am at best agnostic when it comes to talk of spirits, having spent all too much of my youth in all night raps around knocking tables and rocking seances. Raised in captivity by Baptists, I am now long unchurched, impatient with appeals to anybody’s beyond. But if I am more on the Baraka side of things religious, at least the Baraka of the past three decades, I m under no illusion about the powers of illusion; I am a permanent convert to a faith in metaphor. There is a reason that the Black Arts has been so often treated as an unwelcome visitor returned from its premature burial. America in the sixties looked into the mirror and found that it didn’t have a reflection. America in the sixties tried to rush back to its native soil before the sunrise of the seventies, only to find that it had no native soil. America in the sixties was a place of heavy spirits, and the black artists of the age gathered together for a summoning of spells. It was Larry Neal, secretary to the spirits, who delivered to us the "Fragments from the Narrative of the Black Magicians:"

Blood of Christ, dew kissed the corn;
hieroglyphic numbers that shape into leaf-formed men.
I speak the vision, and he is the healed sinner,
suffering the purulent sores of the redeemed. (35)

When people tell you of the purportedly didactic and social realist language of the Black Aestheticians, they don’t seem to have language such as this in mind, nor do they ever quite know what to say about those lemons piled on the step or the nickle hearts left behind by the men of Baraka’s own "Black Art." That hieroglyphic reading of Christ-kissed corn in "Fragments" derives from Nat Turner, who, a heavy reader, was never a literalist, though he was surely a revolutionary. We need some discourse of hauntology, if I might borrow a neologism from a Francophone philosopher born in North Africa, to negotiate now the conditions of being of the questions left us as Larry Neal’s legacy. "The rebirth of the concept of Black Power opens old wounds" he cautioned us in 1968 (Visions 10), and our own return to his texts now brings us the same dangers. Nat Turner saw blood on the corn, and he knew how to heed its hieroglyphs. If it is still far too early to talk of turning finally from fingering the jagged edge of the wounds, we can no longer tarry, tardy as we are, about the task of reading the hieroglyphs, the ghost writing that three decades of reaction have attempted to render finally beyond any comprehending. We have benefitted in recent years from a slowly building body of powerful scholarship about the Black Arts, much of it written by people in this room today, but we remain in the earliest Rosetta Stone stages of reading the leaves left us, the fragments from the narrative in progress lined out by Larry Neal before he was interrupted in mid-question in 1981.