I had already been reading the poetry and essays of Larry Neal for a decade by the time I actually met him. He came to Washington, D.C., in the late Seventies to direct the D.C. commission on the Arts and Humanities, and during that period he appeared as a substitute teacher in the course I was taking with Amiri Baraka when I was a graduate student at the George Washington University. Neal was such a presence in the classroom that it came as a double shock not too long afterwards when we learned that he had died. In one of his poems, his persona, Poppa Stoppa, implores us:

"Remember me baby in my best light,

lovely hip style and all;"

and that is the way we remember Larry -- In the early 1980s, the Arts Commission in D.C. established a series of literary prizes in his memory, and it was my fortune to be the first winner of the Larry Neal Award for poetry, presented in the D.C. Council Chambers in 1983.

So, you know I had to sign up when I received word that a serious conference to begin the work of critical recovery and evaluation of Larry Neal's works was being organized. It took a while; support is never quite as quickly forthcoming for projects like this as it seems to be for conferences on the usual subjects organized by the usual suspects.

But October 19th came 'round at last, and we gathered together on the campus of Brooklyn College to get busy. 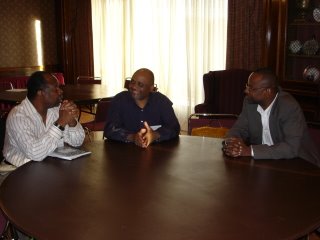 Our host for the occasion was George P. Cunningham, whose Brooklyn College Department of Africana Studies welcomed us and kept things moving. George had been a student of Neal's, as had been Mae G. Henderson, one of the conference organizers, now at the University of North Carolina, and Kimberly Benston, who was slated to be the keynote speaker at the end of the first day. 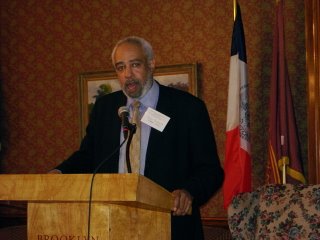 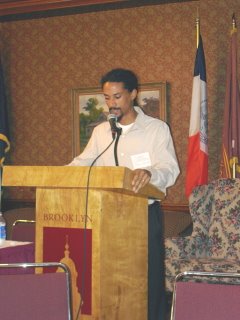 Carter Mathes, of Rutgers, was the other organizer -- He and Mae (that's Carter there in the light shirt -- Mae is sporting a grey jacket in her photo) had been working diligently for some years to locate a home for the event and nail down the relatively small amount of funding required simply to mount the meetings. George, Carter and Mae were often seen putting their heads together off to the side, dealing with those inevitable last minute crises that afflict any conference, and generally rendering them invisible to the participants. 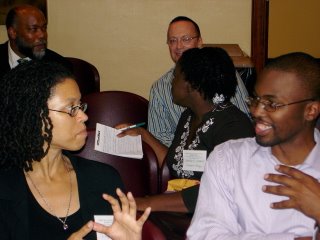 George and Carter got things started with welcoming comments, followed by a heart-felt talk by Mae Henderson in which she shared her personal memories of Larry Neal before turning things over to those of us who were speaking on the panels.

I was the first speaker on the first panel, chaired by Brooklyn's Dale Byam, from the Department of Theater. On the panel with me were Mike Sell, whose work on avant garde movements (including both fluxus and the Black Arts) I had read when it appeared last year, and David Lionel Smith, who I knew from other conferences over the years. Ours was a more general panel, and I took advantage of my opening slot to provide an introductory essay into Neal's works. I'll be posting an excerpt in this space soon. 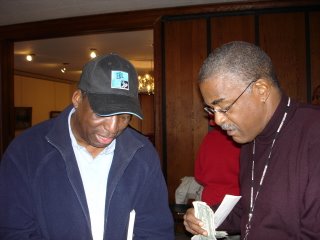 An afternoon session was devoted to "Larry Neal's Soundscape of Revolutionary Cultural production." That panel, chaired by Jeffrey Taylor, featured Amy Ongiri (who I had last seen at the Black Arts conference at Howard University in February), W.S. Tkweme and Frederick Vincent. Amy picked up on the same review of Albert Ayler, first published in CRICKET, that I had spoken about briefly. This was ground that we would visit yet again the next day, and I began to see how our varied responses to this short, controversial essay characterized the many possible readings of Neal's significance for our own critical positions. Frederick Vincent brought something new to the discussions, recordings of the Black Panther's soul music group, THE LUMPEN, that I had known of back in my days at San Jose State.

Do I even need to say that each of these panels provoked extensive comment and debate among the audience? Any who lived through the all night debates of the Sixties will know the kind of thing I mean -- This may not have been quite as heated as we got back in the day, but it was the sort of productive debate that comes when participants recognize that there really is a great deal at stake. 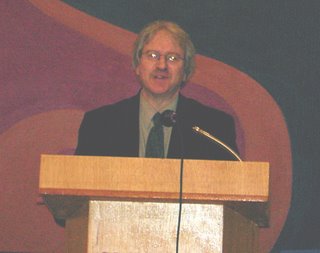 The good folk at Brooklyn College provided us with a Caribbean dinner to cap off the day, during which Kimberly Benston gave us his detailed readings of Neal's importance, intermixed with his best memories of the late poet/critic/ administrator/teacher. The discussions spilled out into the subways later that night

tripping in an under crashing

Found this while working on a birthday bio for Larry Neal at our blogspot. Looking forward to reading the rest of it.