October 21, the final events of the Larry Neal Conference in New York.

But, by way of prelude, first a couple of photos from the first day. My earlier posts did not include any representation of the very first panel, because, as one of the presenters on that panel, I hadn't been in a position to photograph it. Here, though, thanks to Howard Rambsy, are a couple shots of that initial offering. 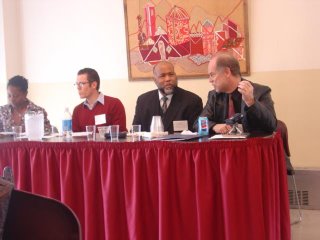 The panel, left to right, was Dale Byam (chair), Mike Sell, David Lionel Smith and Aldon Nielsen. The second photo shows my opening talk, a portion of which was posted in an earlier segment of these reports. 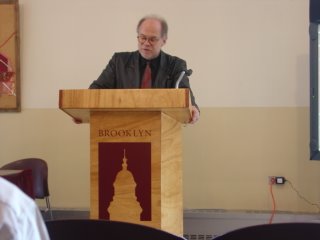 The final event of the conference wasn't scheduled till evening, so I took advantage of the free time to drop by another tribute to a poet, a group reading at the Bowery Poetry Club in memory of Barbara Guest. I'd learned of this event by way of the Poetics List, and Charles Bernstein was kind enough to help me locate the right subway stop for getting to the BPC from over in Brooklyn where I was staying. The reading was hosted by poet Kristen Prevallet, someone I had not seen since well before the birth of the delightful child accompanying her. Lyttle Shaw was there, too, as well as a host of other poets who read from Guest's works and spoke of her importance. Charles Bernstein read from a prose piece he'd published about her, and Guest's daughter addressed the audience near the end. 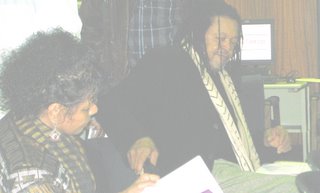 Then, back to the subway and uptown to the Schomburg Library, where the concluding panel on Larry Neal was to be held. 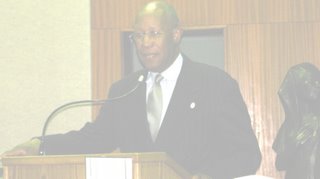 We were greeted by Howard Dodson, director of the Schomburg. I'd last seen Howard, someone I knew from my previous speaking engagements at the Schomburg, when he delivered a paper at a conference on the legacies of slavery held on the campus of the University of California in Santa Barbara. This night, Howard spoke movingly of Neal and addressed the signal importance of the large collection of Neal's papers donated to the library by Larry's wife, Evelyn. The panel itself was less a critical excursion of the type featured earlier in the conference, and more of a memorial from people who had known and worked with Larry during his too short life. 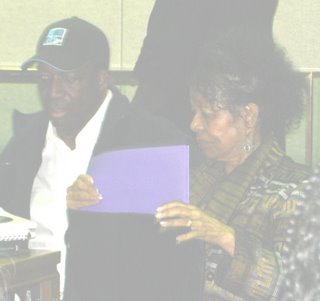 I was especially glad of the chance to visit a bit more with Jayne Cortez, who had given a poetry reading at Penn State last year - and then there was the chance to catch up some more with Joseph Jordan, also on the panel, whose Institute for the Preservation and Study of African American Literature had been part of my life back in D.C. Joseph had brought along with him to the panel an old photograph he wanted to show Quincy Troupe of Quincy talking to Larry. What I spotted at once when he pulled out the photo to show me, though, was that my old Howard University office mate, poet Calvin Forbes, could be seen in the background of the photo. 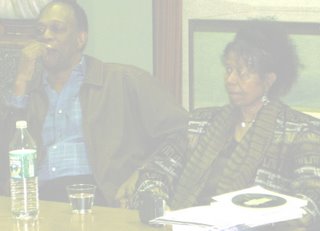 The conference organizers had turned the reading room of the Schomburg into a reception area and we all gathered in the rear of the room to continue the conversations over wine and refreshments. It marked a warm ending to what had been a revealing and inspiring cycle of meetings -- exactly the sort of thing Larry liked to see when he was directing the arts commission in D.C. during the time I had known him.
Then, back to the subway -- and what was my strap-hanging reading material as I flew through the underbelly of the city? Larry Neal's HOODOO HOLLERIN' BEBOP GHOSTS --


Posted by Aldon Lynn Nielsen at 6:12 AM

Whoa...this coverage of the Neal conference was extensive. Now, I can't wait to read your reports on MLA. ha.