C.L.R. James studies at the ALA 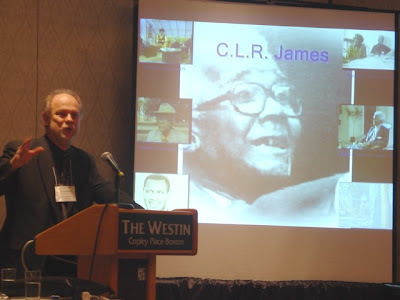 I've been organizing panels on C.L.R. James at the American Literature Association for more than fifteen years now. Since there are so few literature people active in the C.L.R. James Society, these panels have been an important vehicle for keeping James's intellectual legacy active in the wider discussions of cultural studies, political philosophy, history and literature. Many of the authors of important works on James, including Cedric Robinson, Anthony Bogues and Frank Rosengarten, have appeared on these panels over recent years.

This year's panel in Boston featured talks by Gene Jarrett, Cynthia Young and me. Gene, who is moving shortly from the University of Maryland to Boston University, spoke on the subject of James's writings on popular novelist Frank Yerby. Gene's paper was an outgrowth of the work he did on Yerby for his recent book DEANS AND TRUANTS: RACE AND REALISM IN AFRICAN AMERICAN LITERATURE. Cynthia Young, currently on the faculty of Boston College, spoke on Black Britain and James's thoughts on race in the British context. Cynthia published a new book last year, too, SOUL POWER: CULTURE, RADICALISM AND THE MAKING OF A U.S. THIRD WORLD LEFT.

For my part, I departed form my usual critical modes and presented a series of video clips. As we approach the twentieth anniversary of James's death, it struck me that most of the newer scholars of James's work, scholars who are producing exciting new studies that have moved us well past the initial round of critical overviews, have never seen James or heard his voice. The clips I brought with me to Boston were meant to give an indication of the available film of James.

I was only able to locate one American video recording, though I am sure there must be more out there. As part of its Weekend College project, Wayne State University televised a series of discussions over its educational channel in the mid-1970s. One series of three brodacsts featured James in interviews with Gloria House, a Detroit area educator and activist. Around the same time, James was part of a documentary on cricket that aired over BBC. In fact, if it were not for BBC4, most of the video of James we have would not exist. But there were some other independent tapings. There is an excellent 1982 film titled TALKING HISTORY that brought James together with E.P Thompsom for a wide-ranging discussion. Another film of the era gives us James in casual conversation with dub poets Mikey Smith and Linton Kwesi Johnson. One of my favorites among the BBC broadcasts is an in-depth interview Stuart Hall conducted with James. Near the end of his life, James taped a series of BBC LECTURES, which include typically provocative discussions between James and his audience. In one of these, on the topic of American politics, one of the questioners was a young Cedric Robinson, around the time he was writing his classic text BLACK MARXISM. Selwyn Cudjoe taped an interview with James which he makes available through his CALLALOUX publishing venture. A wonderful memorial to James, including segments from several of those earlier films and broadcasts, aired on BBC4 shortly after his death in 1988. The tribute includes commentary from Tariq Ali, Paul Buhle, Robin Blackburn and others.

The photo above comes to us once again from Howard Rambsy, who also gave a paper on the first day of the ALA.
Posted by Aldon Lynn Nielsen at 11:51 AM

Hearing (and seeing) your prez. on C.L.R. James was a return to my "roots." Back in the day, I discovered your critical introduction on James as an undegrad at Tougaloo before I came across your other work. In fact, when I finally got a hold of _Black Chant_, I remember saying, "oh, he writes about poetry too?"

Since that time, literary folks have remixed my statement: "you know, Aldon Nielsen writes about C.L.R. James too."
--Howard

I'm trying to find exactly what years James was at Howard University, and no published work seems to specify them. John H. McClendon describes it as a period when African Studies was "a hot bed for all kinds of degenerate, backward, right-wing forms of Pan-African nationalism," anathema to James, but when exactly was that? In the 1950s, Howard was still up in the fact of McCarthyism, and paying a price for it.

I don't know the exact dates of James's time at Howard, but it was in the late 1960s and it was quite brief. He quickly became a full-time faculty member in History at Federal City College.